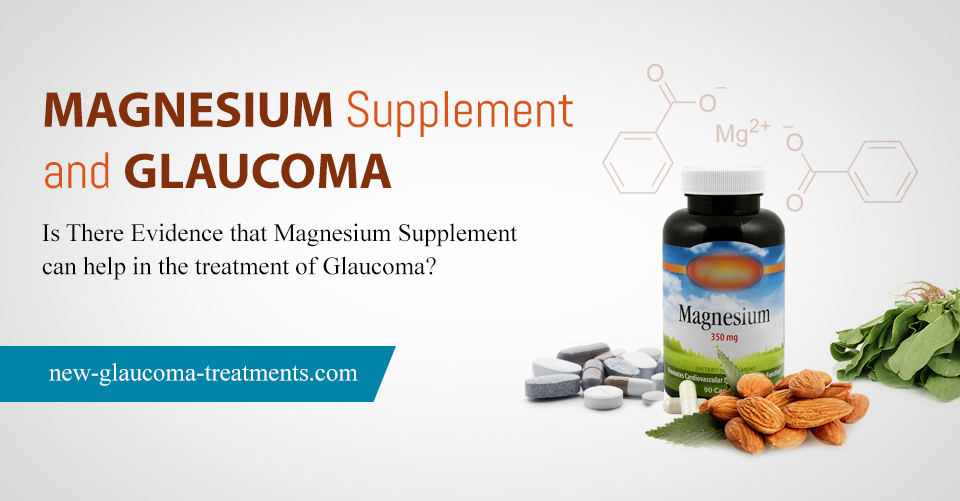 Magnesium is an element with atomic number 12. It has many clinical uses though the most common over-the-counter use is as a laxative.

Evidence that Magnesium can help in the treatment of Glaucoma

There is evidence that nifedipine (a commonly used calcium channel blocker) can stabilize visual fields in those with normal tension glaucoma and/or those with peripheral vascular disease.[3] This potential benefit may be due to an increase in blood supply to the eye.[4] However, nifedipine has significant systemic side effects which would likely outweigh the unproven potential benefit to those with glaucoma. Magnesium, on the other hand, is well-tolerated when taken in oral doses of less than 350mg per day. Could it provide an effective yet low risk benefit to those with glaucoma?

The only study to evaluate the effect of Magnesium on visual fields was published in 1995.[5] This was a small study of only 10 patients, all of whom also had a “vasospastic syndrome” and progressive loss of visual field despite “normal or normalized intraocular pressure”. Each patient was given 125.5mg of Magnesium to be taken twice daily for a month. Although there was a tendency toward visual field improvement, this did not reach statistical significance.

Magnesium is generally well tolerated with few potential side effects if taken orally in doses of less than 350mg per day.[6] The most commonly noted side effect is loose stool and diarrhea. Indeed, many common over-the-counter laxatives are essentially large doses of Magnesium (e.g. Milk of Magnesia).

Magnesium can decrease absorption of many antibiotics. As such it is recommended that oral supplementation with Magnesium be discontinued during use of oral antibiotics.

There is some evidence that Magnesium could result in decreased platelet function.  Therefore, it should be used with caution in anyone taking “blood thinners” such as aspirin, clopidogrel (Plavix), dalteparin (Fragmin), enoxaparin (Lovenox), heparin, indomethacin (Indocin), ticlopidine (Ticlid), and warfarin (Coumadin).

Magnesium can enhance the absorption of the sulfonylurea class of anti-diabetes medications. This could lead to dangerous hypoglycemia (low blood glucose). Thus, oral Magnesium supplementation should be avoided in those taking carbutamide, acetohexamide, chlorpropamide, tolbutamide, glibenclamide, gliclazide, glibornuride, glipizide, glyclopyramide, and glimepiride.

Oral Magnesium supplementation could decrease absorption of Digoxin. This could result in inadequate control of cardiac (heart) rhythm abnormalities.

“Potassium-sparing” diuretics could result in an increased blood concentration of Magnesium. As such, Magnesium supplementation should be avoided or done with caution in those taking amiloride (Midamor), triamterene (Dyrenium), and spironolactone (Aldactone).

Although Magnesium is well-tolerated when taken by mouth there is insufficient evidence to support its role in the treatment of glaucoma. Additionally, the potential for prescription drug interaction is significant enough to avoid use of this supplement with any of the classes of medications listed above.