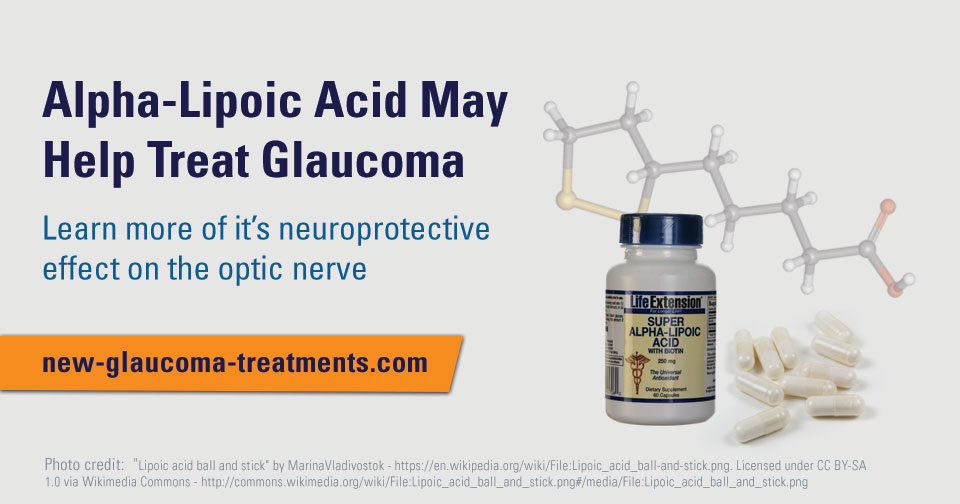 What is Alpha-Lipoic Acid?

Each cell in our body has a number of bean-shaped power generators called mitochondria. Without them we wouldn’t survive but a few seconds. But power generation at the microscopic level is messy in that it produces a lot of free-radicals. Left unchecked these could destroy the cell via oxidative damage. A powerhouse that destroys the very cell it is trying to power isn’t much good to the cell. So the cell produces a powerful antioxidant to protect it from these damaging mitochondrial byproducts. Alpha-lipoic acid is the name of this naturally occurring substance. Not only does it scavenge free-radicals, but it can actually regenerate other antioxidants.

Evidence that it can be effective in the treatment of glaucoma:

One small Russian study comparing standard glaucoma treatment to standard treatment plus Alpha-Lipoic acid in patients with open angle glaucoma reported a benefit in those patients who took 150mg per day.[1] As my knowledge of Russian is limited to names of vodkas, I can’t vouch for the quality of this study.  Nevertheless, there is good evidence that Alpha-lipoic acid can provide a neuroprotective effect.[2] It’s one thing to show that a chemical can protect a cell in a petri dish, quite another to show that something taken by mouth could actually be absorbed into the bloodstream and then pass the blood-brain barrier. It turns out that Alpha-Lipoic acid, unlike many other antioxidants, easily crosses the blood-brain barrier and therefore should be available to protect central nerves such as the optic nerve from oxidative damage.

Potential Risks and Side Effects

In theory the use of Alpha-Lipoic acid could result in hypoglycemia (low blood sugar). In those whose blood sugar is not well-controlled this could be a good thing.  However, care should be taken when used along with other antidiabetes drugs such as glimepiride (Amaryl), glyburide (DiaBeta, Glynase PresTab, Micronase), insulin, metformin (Glucophage), pioglitazone (Actos), and rosiglitazone (Avandia).

Although unproven, antioxidant use may decrease the effectiveness of chemotherapy.[6] Anyone undergoing chemotherapy should consult with their oncologist prior to initiating antioxidant therapy.

Animal studies suggest that Alpha-Lipoic acid may decrease the effectiveness of thyroid hormone therapy.[7] As such it should be used with caution in people who are also taking thyroid hormone medications.

Recommended Dosage and Where to Buy:

Alpha-Lipoic acid can be found at most health food stores as well as online. Take note, however, that the quality can vary greatly. To be certain you are getting a high quality product that is formulated for maximum benefit I would recommend you only purchase supplements from well-respected brands such as Life Extension or Doctors Optimal Formula.