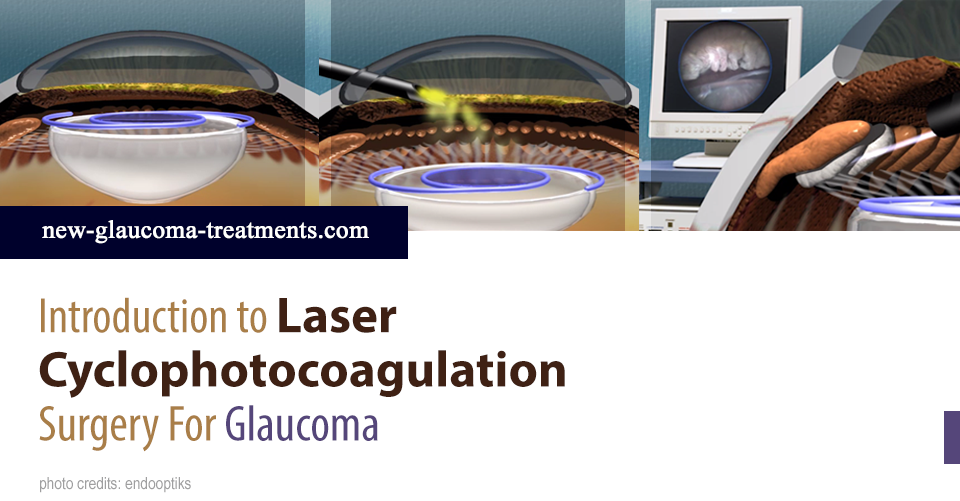 Most surgical glaucoma treatments work by making it easier for fluid to leave the eye.  Cyclophotocoagulation (CP) takes a different approach. It works by decreasing the production of aqueous fluid. Aqueous fluid is produced by finger-like projections of tissue hidden behind the iris. These are called the ciliary processes. If these ciliary processes are damaged then less fluid is produced. Less fluid production should result in a lower eye pressure (IOP).

Ciliary process destruction (cyclodestruction) as a method of treating glaucoma has been around since the mid-twentieth century. However, earlier cyclodestructive techniques were used only in eyes that had failed all other medical and surgical therapies. There were a number of very good reasons for limiting the use of this procedure. The amount of IOP reduction after Cyclophotocoagulation was unpredictable and difficult to titrate (control). Additionally, the procedure was painful and associated with a number of risks including dangerously low IOP (“hypotony”), loss of vision, and shrinking of the eye (”phthisis”). It was even possible to develop inflammation in the other non-treated eye after Cyclophotocoagulation – a potentially blinding condition called sympathetic ophthalmia![1]

Earlier attempts at cyclodestruction were, for the most part, done by placing a laser probe on the surface of the eye. This technique was called Transscleral Cyclophotocoagulation (TCP) as the laser beam had to focus through the wall of the eye (sclera) in order to reach the ciliary body. Because the sclera is opaque the surgeon could not actually see the ciliary processes being destroyed. It’s likely that many other tissues in the eye were also being damaged using TCP. It’s also believed that this “collateral damage” was the reason for both the unpredictable IOP lowering and the high complication rate.

One of the first things most surgeons are taught is the importance of visualizing the structures being worked upon. After all, if you can’t see it, how do you know you are cutting, suturing, or coagulating (melting) the correct tissue? With Transcleral Cyclophotocoagulation (TCP) the surgeon didn’t know. Fortunately, there is now a method of treating the ciliary body processes which uses a tiny endoscope to visualize the area being treated.

An endoscope is essentially a tube that includes a lens, a fiber optic cable, and a light source. Amazingly, the Endo Optiks endoscope used for ECP also contains two lasers (one for aiming and one to treat). All of this in a tube no larger than a large hypodermic needle! With this technology the surgeon can view the magnified image of the ciliary processes on a video monitor before choosing which areas and for how long to treat.

How Well Does ECP Work?

This is a question to which there is still no clear answer. Most of the studies of ECP have been small in size, evaluated ECP only in combination with cataract surgery, or were lacking a comparison group.

On average the IOP one and two years out from combined cataract and Endoscopic Cyclophotocoagulation surgery had dropped by just over 10% (about 2mmHg) from the pre-operative IOP. Although the magnitude of IOP reduction does not seem to be impressive it must be kept in mind that this post-operative IOP reduction was achieved with (on average) one less glaucoma drop than was being used prior to surgery.

What Are the Risks of Endocyclophotocoagulation (ECP)? →