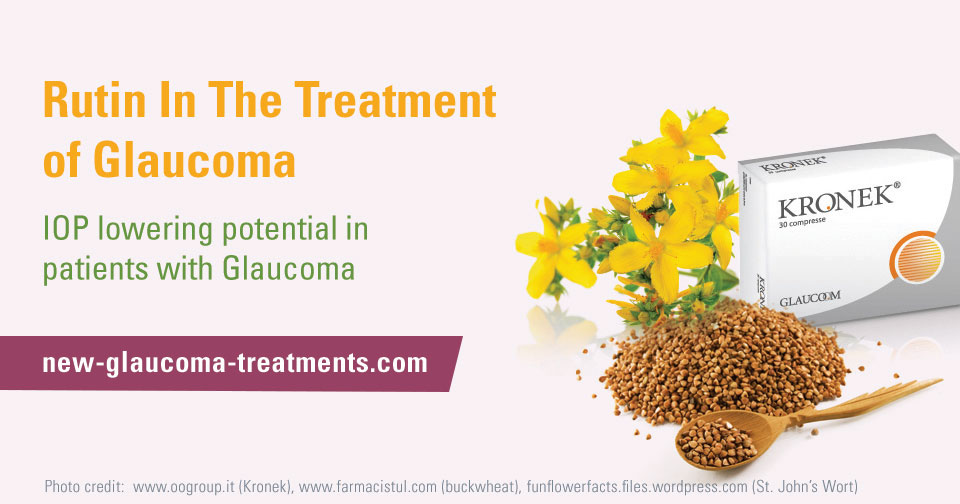 Rutin is a flavonoid naturally found in apples, buckwheat, elder flowers, eucalyptus, Ginkgo biloba, hawthorn leaves and flowers, Japanese pagoda tree, lime tree flowers, rue, St. John’s Wort, among other fruits and vegetables. It is most concentrated in Ziziphus Jujuba (Chinese/Korean Date). It appears to have antioxidant properties.[1] Rutin is converted in the gastrointestinal tract to quercetin[D1] , which is believed to be responsible for many of the touted benefits of Rutin.

Evidence that Rutin can be effective in the treatment of Glaucoma

There is no direct evidence that Rutin could have an IOP lowering effect on the eye.  However, two studies have evaluated the effect of Rutin combined with Forskolin (Coleus) on IOP in patients with glaucoma. The specific product studied was Kronek® (SOOFT Italia, Montegiorgio, Italy) which contains Rutin 200mg, Forskolin (Coleus) 15mg, Vitamin B1 0.7mg, and Vitamin B2 0.8mg.

The first study evaluated the use of Kronek® in patients with medically controlled primary open angle glaucoma. It was a small study (only 16 patients) and without the benefit of a placebo control. Despite these severe limitations, the IOP appeared to decrease by an average of 20% after 40 days of use.[2]

The most impressive study evaluated Rutin and Forskolin (Coleus) in patients awaiting glaucoma surgery.  These patients had uncontrolled IOP on maximum tolerated medical therapy (MTMT).  Patients in the study treatment arm were instructed to take the supplement twice daily.

In addition to the IOP lowering potential, there is evidence that Kronek® may also improve the symptoms of ocular surface disease related to the use of BAK-containing glaucoma drops.[4]

Use of Rutin has been associated with flushing, headache, mild gastrointestinal distress, and skin rashes.[5]

Based on the studies evaluating the effect of combined Rutin and Forskolin (Coleus) on IOP, it would be reasonable to use 400mg of Rutin and 30mg of Forskolin (Coleus) per day (divided into two doses). Because supplements can vary widely in quality and concentration of the active ingredients, I recommend use of the actual studied brand, Kronek®, if available locally or online.