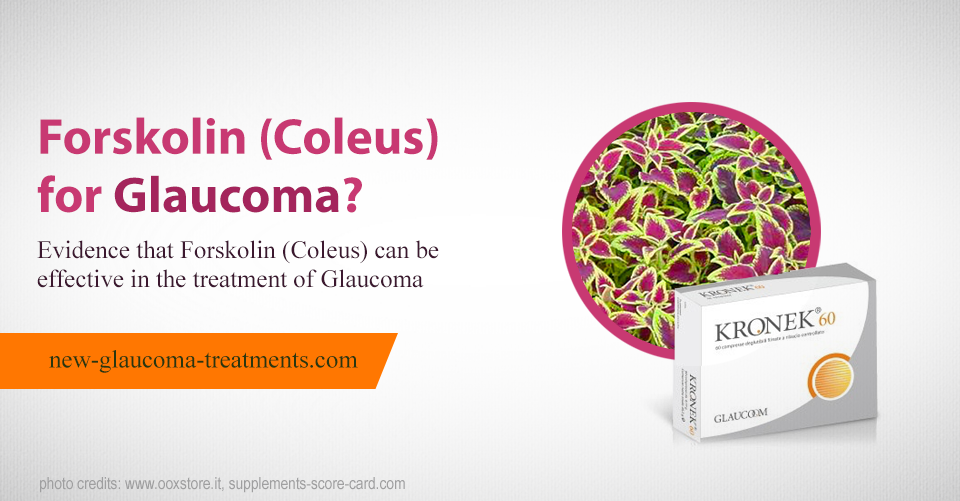 What is Forskolin (Coleus)?

Forskolin (Coleus) is an extract from the roots of the plant Plectranthus barbatus (Coleus forskohlii). It has traditionally been used in ayurvedic medicine.[1] Although commonly available as an eyedrop it is also available as an oral supplement.

There are no studies that have evaluated the effectiveness of Forskolin (Coleus) eye drops in the treatment of glaucoma. There are multiple studies, however, that have evaluated its effect on aqueous flow and intraocular pressure (IOP) in animals and humans without glaucoma. Forskolin (Coleus) appears to reduce the production of aqueous fluid with little or no impact on aqueous outflow.[2]

In one Japanese human study a single drop of Forskolin (Coleus) had no effect on IOP whereas a second drop placed five minutes after the first drop resulted in a decrease of IOP by 1.1-3.7mmHg one hour after instillation.[3]

The first study evaluated the use of Kronek® in patients with medically controlled primary open angle glaucoma. It was a small study (only 16 patients) and without the benefit of a placebo control. Despite these severe limitations, the IOP decreased by an average of 20% after 40 days of use.[4]

The most impressive study evaluated Forskolin (Coleus) and Rutin in patients awaiting glaucoma surgery. These patients had uncontrolled IOP on maximum tolerated medical therapy (MTMT).  Patients in the study treatment arm were instructed to take the supplement twice daily.

In addition to the IOP lowering potential, there is evidence that Kronek® may also improve the symptoms of ocular surface disease related to the use of BAK-containing glaucoma drops.[6]

Use of Forskolin (Coleus) eyedrops have been associated with redness of the eye (hyperemia) and irritation.[7]

Forskolin (Coleus) may have an antiplatelet (blood-thinning) effect.[8] As such, it should be avoided or used only with extreme caution in those who are already taking oral blood thinning medications. An incomplete list of blood thinners with which Forskolin (Coleus) should be avoided would include Aspirin, Clopidogrel (Plavix), Dalteparin (Fragmin), Enoxaparin (Lovenox), Heparin, Ticlopidine (Ticlid), and Warfarin (Coumadin).

Forskolin (Coleus) may lower blood pressure.[9] In those whose blood pressure is not well-controlled this could be a good thing.  However, care should be taken when used along with other blood-pressure lowering medications such as Captopril (Capoten), Enalapril (Vasotec), Losartan (Cozaar), Valsartan (Diovan), Diltiazem (Cardizem), Amlodipine (Norvasc), Hydrochlorothiazide (HydroDIURIL), Furosemide (Lasix), as well as many others.

Forskolin (Coleus) has blood vessel dilating properties.[11] In theory this could result in a dangerously low blood pressure in someone who is also using nitrate medications.  As such Forskolin (Coleus) should not be used in those who are also taking nitrates such as Nitroglycerin (Nitro-Bid, Nitro-Dur, Nitrostat) and Isosorbide (Imdur, Isordil, Sorbitrate).

As there have been no studies evaluating Forskolin (Coleus) eye drops in patients with glaucoma it is not possible to know what dosing amount or frequency would be effective (if any).  The studies that evaluated use in humans without glaucoma used eye drops with a Forskolin (Coleus) concentration of 1%.[12]

A study published in The Lancet documented the greatest IOP lowering effect one hour after placement of the eye drop. IOP remained reduced (though less so) five hours later. No dosing studies have been published. However, from The Lancet study alone it would be reasonable to conclude that four times daily dosing would likely be required in order to achieve a sustained reduction in IOP.

The likely need for frequent dosing throughout the day makes Forskolin (Coleus) a poor choice for glaucoma therapy. There are at least two reasons for this:

1) Multiple studies have confirmed that adherence to glaucoma therapy worsens as the number of daily drops increase. In other words, the more drops one has to use each day the less likely it is that all of them will be instilled.

2) Mounting evidence suggests that IOP fluctuation may also be a contributor to worsening glaucoma. Missing scheduled drops would allow the IOP to rise. It is likely that drops will be forgotten when using a medication that must be dosed multiple times a day. Thus, use of a drop that must be taken four times each day is essentially ensuring fluctuating IOP (and possible worsening of glaucoma) in all but the most obsessive-compulsive people.

Finally, based on the Japanese study a single drop is unlikely to have any beneficial effect. In order to achieve any benefit a second drop would need to be placed in the eye five minutes after the initial drop. This would make it quite impractical as a treatment option for most people with glaucoma.

Based on the studies evaluating the effect of combined Forskolin (Coleus) and Rutin on IOP, it would be reasonable to use 30mg of Forskolin (Coleus) and 400mg of Rutin per day (divided into two doses). Because supplements can vary widely in quality and concentration of the active ingredients, I recommend use of the actual studied brand, Kronek®, if available locally or online.

4) Pescosolido N, Librando A. Oral administration of an asociation of forskolin, rutin and vitamins B1 and B2 potentiates the hypotonising effects of pharmacologic treatments in POAG patients. Clin Ter 2010;161(3):e81-5.