Resveratrol May Protect the Eyes from Glaucomatous Damage 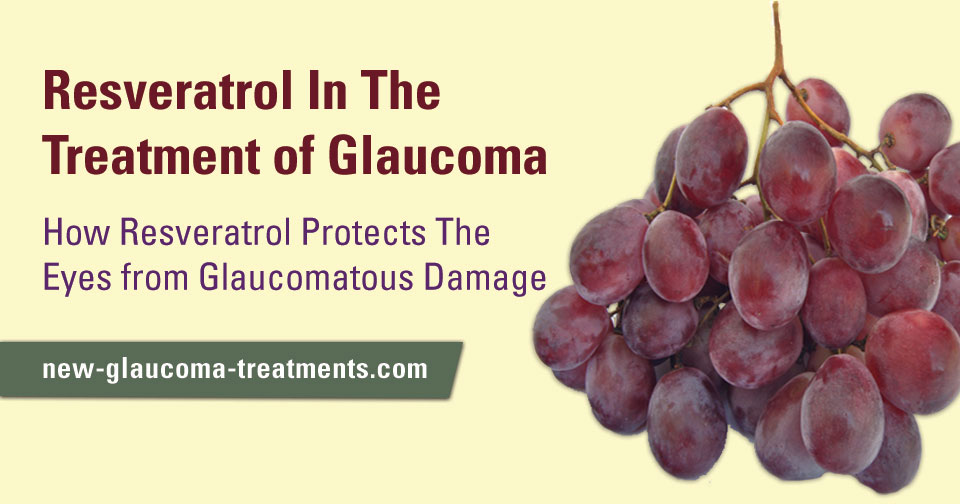 Resveratrol is naturally found in the skin of grapes and the wine made from those grapes[1]. It can also be found in Açai berries,[2] grape tomatoes, peanuts,[3] plums, and raspberries. It is most well-known for its possible role in extending lifespan. The evidence supporting this benefit, however, is based on fruit fly (not mammalian) research. Thus, it’s a stretch to believe that humans could derive the same life-extending benefit from Resveratrol as do fruit flies.

Although Resveratrol is well absorbed from the gut, very little of it makes it into the general bloodstream. This is because the liver inactivates the vast majority of what is absorbed.[4] Once past the liver, however, Resveratrol appears to be able to pass the blood-brain barrier and enter brain tissue.[5]

Evidence that Resveratrol can be effective in the treatment of Glaucoma

Laboratory evidence suggests that Resveratrol can protect neurons from the toxic effects of inflammation.[6] It has also been shown to increase cerebral blood flow as well as provide a neuroprotective effect.[7] This neuroprotective benefit appears to be enhanced when both Resveratrol and Melatonin are present.[8] Resveratrol also appears to have antioxidant properties.[9]

Intraocular pressure (IOP) elevation in the most common form of open angle glaucoma is thought to be due to malfunction of the eye’s drainage grate (trabecular meshwork). This malfunction is known to be associated with certain biochemical markers of inflammation[10] and oxidative cellular damage.[11] One laboratory study demonstrated that Resveratrol was able to decrease these markers in trabecular meshwork cell culture models of oxidative damage.[12]

UPDATE: In the March 2020 issue of Investigative Ophthalmology & Visual Science, Kejia Cao and colleagues published their results of a lab experiment demonstrating that Resveratrol protects retinal ganglion cells in an induced mouse model of ocular hypertension.

Resveratrol appears to be safe when taken in doses commonly available in over-the-counter supplements. Indeed, when taken in amounts up to 5,000mg per day the only observable side effects were gastrointestinal upset[13] and nausea.[14]

A Caution for those with Hormone Sensitive Cancers or Conditions[1]

Resveratrol has a structure that is similar to estrogen. As such, it may alter estrogen metabolism.[15] Women with the following conditions should in general avoid use of Resveratrol:  breast, uterine, and ovarian cancer, as well as endometriosis and uterine fibroids.

Resveratrol is known to have anti-platelet properties[16] which can result in undesirable bleeding in those who are already taking anticoagulant medications such as aspirin, apixaban (Eliquis), clopidogrel (Plavix), dabigatran (Pradaxa), rivaroxaban (Xarelto)and warfarin (Coumadin).  It is important to let all your doctors know if you are taking this supplement. It is also prudent to discontinue Resveratrol prior to any planned surgery.

Resveratrol increases the body’s sensitivity to insulin.[17] As such, it may have an effect on blood glucose. For those whose blood sugar is not well controlled this could be a good thing. This effect can be seen with oral doses as low as 5-10mg per day. However, if one’s blood sugar is well-controlled then Resveratrol should be used with caution and only with the knowledge of the physician who is monitoring one’s blood sugar.  Resveratrol may enhance the blood sugar lowering effect of medications including glimepiride (Amaryl), glyburide (DiaBeta, Glynase PresTab, Micronase), insulin, metformin (Glucophage), pioglitazone (Actos), and rosiglitazone (Avandia), among others.

Resveratrol may lower blood pressure. In those whose blood pressure is not well-controlled this could be a good thing. However, care should be taken when used along with other blood-pressure lowering medications such as captopril (Capoten), enalapril (Vasotec), losartan (Cozaar), valsartan (Diovan), diltiazem (Cardizem), amlodipine (Norvasc), hydrochlorothiazide (HydroDIURIL), furosemide (Lasix), as well as many others.

As no human glaucoma studies have been done looking at the role of Resveratrol in the treatment of glaucoma, it is not possible to recommend a proper dosage. However, it appears that Resveratrol’s benefit on cerebral (brain) blood flow occurs with daily dosages in the range of 250-500mg per day. Morning dosing may result in better bioavailability.