So why choose canaloplasty over other more traditional glaucoma surgeries such as trabeculectomy or tubes? Well, there are number of reasons but the main one is safety.

Age is another factor to consider when choosing among glaucoma surgeries. For example, when you’re younger, trabeculectomy tends not to be such a good choice. There are a number of reasons for this. One is that younger people tend to have a more aggressive healing response and healing works against you with trabeculectomy. The only way to avoid that healing response is to use something called an “antimetabolite”, which results in a permanent loss of ability to heal in the area of the eye where the trabeculectomy was performed. This then put somebody in a lifetime risk of infection and loss of vision. Someone who’s very young has many years to be concerned about such a thing. So, for that reason, age factors in favor of canaloplasty, which does not have those lifetime risks that trabeculectomy does.

If you have an active life style, it’s very important that you consider your glaucoma surgery options carefully. Certain types of glaucoma surgeries, such as trabeculectomy, do not go together well with active lifestyles; especially if that lifestyle involves water sports. Because with trabeculectomy, a small blister-like structures form on the eye that is very delicate and can easily be ruptured. Any kind of activity that could potentially damage that bleb should be avoided. Diving into the water without goggles is one such activity. Therefore, if you have trabeculectomy, for the rest of your life you will need to wear protective goggles, with any type of water sport. Such a restriction simply does not exist with canaloplasty.

Race is also a factor in the choice of Glaucoma surgery. For example, certain races such as African Americans tend not to do well with trabeculectomy because the healing response can be more aggressive in certain races. Trabeculectomy tends not to succeed as often, or for as long, as it would, in, say Caucasians. Such a race criteria is not an issue with canaloplasty. Indeed, canaloplasty really gained great success because of the experience of a doctor in South Africa with viscocanalostomy which is a similar type of surgery that is not quite as successful as canaloplasty but worked very well in that population which did not respond well to trabeculectomy. So, there’s a very very good track record of this type of non-penetrating surgery in all races.

Medication used is another thing to consider. With traditional glaucoma surgeries, such as trabeculectomy or tubes, these surgeries generally are not offered unless glaucoma is showing progression on what we call “maximally tolerated medical therapy”.This is actually a bit of a misnomer because what we mean by that is “medication used that is tolerated”. In other words, medications used that often causes irritation, dry eyes, burning, itching, tearing, and in some cases dark circles around the eye, or dry throat/dry mouth… So, you can see that by “maximally tolerated”, what we really mean is, “barely tolerable”. And the reason for that is that generally the risk of surgery is high enough that we would not want to consider surgery as long as somebody is at least minimally tolerating their medications.

Canaloplasty allows us to think about the option of surgery earlier because its safety profile compared to the traditional surgeries is so much better. In fact it’s good enough, that when someone starts to have difficulty with their drops perhaps even with the expense of their drops, it may be worth considering canaloplasty rather than risk someone not using his or her drops because of the expense or because of the side effects; because after all, if the drops aren’t being used regularly, they’re really not effective.

So these are just some of the reasons why I offered canaloplasty to my patients and why if you have glaucoma you may want to consider canaloplasty over one of the more traditional glaucoma surgeries.

I hope this one’s been helpful to you in making your decision about your glaucoma treatment. 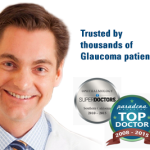 Dr. David Richardson, MD. is a Board-certified Ophthalmologist and Eye Surgeon in Southern California. He is a recognized and respected, cataract and glaucoma surgeon; and is among an elite group of eye surgeon in the country performing the highly specialized canaloplasty procedure.