Antioxidants In The Treatment Of Glaucoma 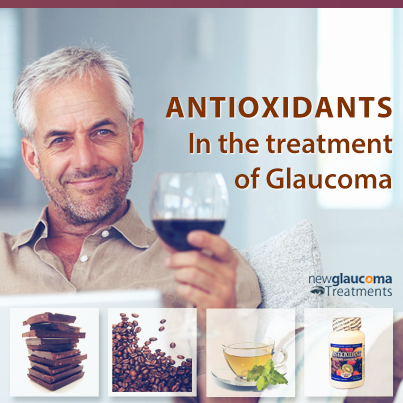 Glaucoma is primarily a disease of the optic nerve. The optic nerve is, after all, a nerve. So, anything that has been shown to protect nerve tissue from damage (provide “neuroprotection”) could have a role in the treatment of glaucoma. Antioxidants protect living tissue from “oxidative” damage. So, in a broad sense, antioxidants could be considered to be neuroprotectants.

What, Exactly, Are “Oxidants”?

Chemical reactions are occurring continuously in our bodies. One by-product of these chemical reactions is the production of a highly reactive element called singlet oxygen. This singlet oxygen is what results in “oxy”dative damage to our healthy body tissues. It’s called singlet oxygen because it only has one (a single) electron. It wants two. Desperately. Because of its intense desire for a second electron, singlet oxygen doesn’t stay “single” very long. Indeed, it steals an electron from the very first molecule it encounters. Now that molecular is without an electron and is called a free radical.

Free radicals don’t like to be without electrons either. They may strip electrons from other molecules or join with another molecule and share its electrons. In this way free radicals resulting from oxidative stress can damage the cells in the body.

It has been speculated that free radicals are associated with cell damage to the eyes. Indeed, there is evidence that oxidative stress can damage the eye’s natural outflow system and optic nerve[1,2]. Several studies have shown that patients with glaucoma have damage in the DNA of the trabecular meshwork that can be attributed to oxidative stress. Damage to the trabecular meshwork could result in an increase in the intraocular pressure (IOP).

The Role of Antioxidant Supplements

When most hear the term “supplements” they think of vitamins and antioxidants. Many vitamins are antioxidants, but not all antioxidants are vitamins. Examples of antioxidant supplements include vitamins A, C, E, Alpha-lipoic acid, ?-carotene, ?-cryptoxanthin, ginkgo biloba, lycopene, lutein, and zeaxanthin, curcumin, glutathione, n-6 to n-3 polyunsaturated fatty acid.

Foods may also contain antioxidants. Some of the foods with high antioxidant content include coffee, red wine, green tea, and dark chocolate.

It is reasonable to assume that consuming foods or taking supplements with a high antioxidant content could protect the optic nerve from oxidative damage and limit the progression of glaucoma. Alas, it’s not so simple. Many naturally occurring antioxidants are not well absorbed when taken by mouth. Even those that are well absorbed may not get to the optic nerve or other eye tissues as the eye, like the brain, is a “privileged structure”. In other words, many chemicals simply are not allowed access to the eye. Finally, some compounds (such as coffee) that have antioxidant effects may also raise IOP by some other mechanism.

If you are considering taking oral supplements in order to treat your glaucoma it is important to first consult with your primary doctor (your internist or family physician). Some supplements that may seem safe (after all, they’re sold over the counter without a prescription) can interact with prescription medications and potentially result in severe side effects. For example, many natural products have blood thinning properties. If they are taken with prescription blood thinners (such as coumadin, Pradaxa, aspirin, etc.) severe bleeding could result that could even be life threatening.

Despite all of the theoretical benefit of antioxidant use, according to a study published in 2003 “no significant association between antioxidant consumption (vitamin A, C, E, ?-carotene, ?-cryptoxanthin, lycopene, lutein, and zeaxanthin) and the risk for developing POAG was found[3].” But what about their role in treating glaucoma that already exists? The short answer is that we simply don’t know for most antioxidants. A few, however, are showing promise in recent clinical trials. More on that ahead…