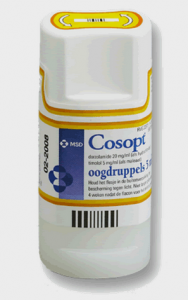 Is there any disease left that isn’t related to oxidative damage anymore?  Although we generally think that glaucoma treatment is based on lowering IOP, a new study in the Archives of Ophthalmology suggests that drugs with an antioxidant effect may have a beneficial effect independent of IOP lowering ability.

Cosopt is one of two “combination” glaucoma drugs available in the US.  Containing both Timolol (a Beta-blocker) and Dorzolamide (a Carbonic Anhydrase Inhibitor, or CAI), it is a mainstay of glaucoma therapy because it is easy to use (twice daily dosing), has a good IOP lowering effect, and (now that it is available in generic form) can be relatively inexpensive.

Researchers in Italy exposed trabecular meshwork cells (these are the cells that block or allow fluid out of the eye) to hydrogen peroxide (an oxidant).  Both Timolol and Dorzolamide independently protected these cells from damage.  Could it be, then, that Cosopt works as a treatment for glaucoma by both lowering IOP and protecting from oxidative damage?  Although it would be difficult to answer this question, I imagine that these results will have many ophthalmologists giving Cosopt a second look (and possibly a preferential choice over the other combination agent, Combigan).

In the meantime, I’ll continue taking my daily antioxidant supplements…

Glaucoma Characterized In New Research As A Neurologic Disorder Rather Than Eye Disease (medicalnewstoday.com)

Make an appointment with an eye doctor in your area now.  If you live in the greater Los Angeles area and would like Dr. Richardson to evaluate your eyes for glaucoma call 626-289-7856 now.  Same day or next day appointments are available Tuesday through Saturday.