Micropulse Transscleral Cyclophotocoagulation (MP3) as a Treatment of Advanced Glaucoma 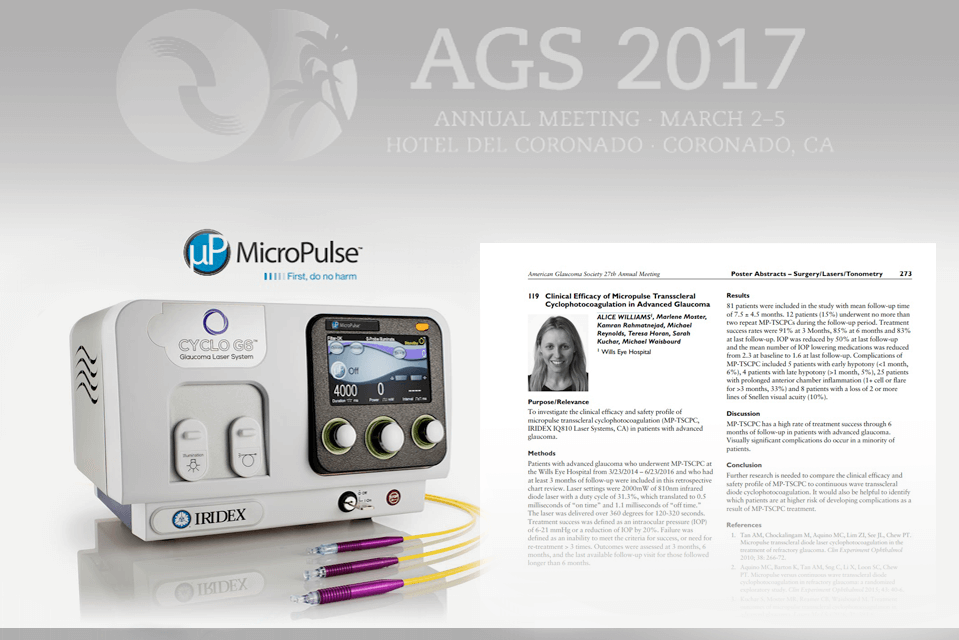 Advanced glaucoma is a particularly tricky condition to treat. If not aggressively controlled, vision will be lost, sometimes over a very short period of time. However, all surgical treatments also carry a small risk of loss of vision immediately or shortly after surgery. Add to this the fact that the more advanced the glaucoma the more likely someone will have a severe, permanent loss of vision after surgery. What is a patient to do?

The study team evaluated the charts of 79 patients with advanced glaucoma who underwent MP3 and were followed for at least 3 months. Average pre-op vision was 20/200 (ranged from 20/20 to complete blindness). Average IOP prior to surgery was 32mmHg. Three months after having this glaucoma treatment 85% had either an IOP between 6-21mmHg or a 20% reduction in IOP. Of those followed to six months 78% still met this definition of success. Average IOP after surgery at the 3 and six month marks were 14.4mmHg and 15.8mmHg, respectively. Medication use dropped from 2.3 medications to 1.6 (on average).

In summary, Micropulse Cyclophotocoagulation (MP3) appears to be an effective treatment of advanced glaucoma. However, a higher rate of vision loss was observed than has been seen in other studies of MP3. It should be noted, as mentioned earlier, that this risk tends to be higher in those with advanced glaucoma. Whether the risk of vision loss after MP3 is, indeed, lower than what would be expected with trabeculectomy or glaucoma drainage device implantation would be a worthy topic for a future study.