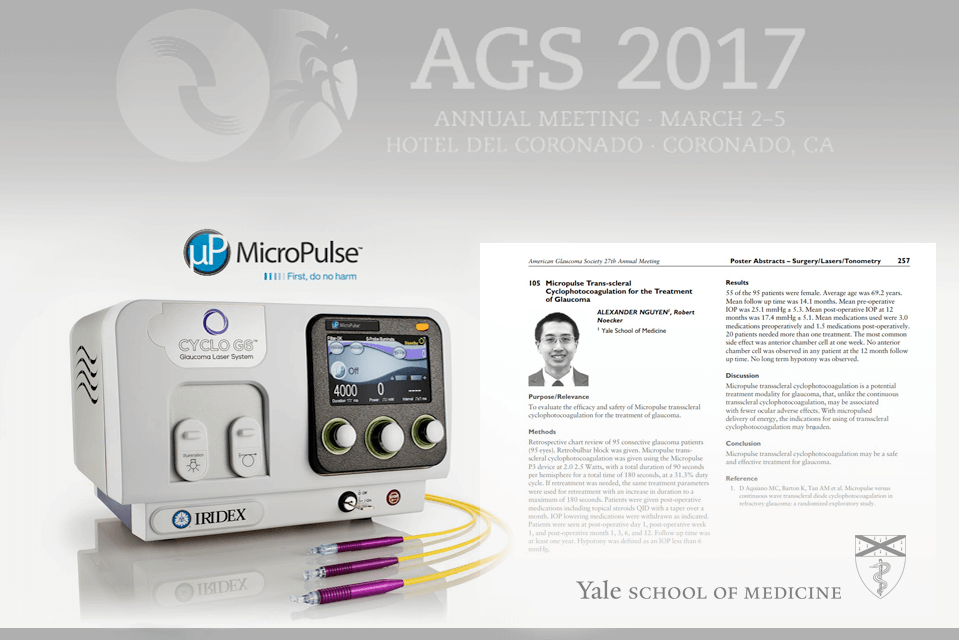 Micropulse Trans-scleral Cyclophotocoagulation using the IRIDEX P3 handpiece (aka TS-CPC or MP3) is a relatively new take on a glaucoma laser treatment that has been around for decades. As a recent innovation, most studies reported to date have only short-term (3 or 6 month) data. For a glaucoma treatment to be of true benefit to most patients, however, it needs to work over a period of years, not months.

Doctors Alexander Nguyen and Robert Noecker recently addressed this issue in a paper presented at the American Glaucoma Society (AGS) 2017 Annual Meeting in Coronado, CA. They reviewed the charts of 95 patients with glaucoma who had undergone Micropulse Trans-scleral Cyclophotocoagulation and had been followed for at least a year after surgery.

The average IOP prior to this glaucoma treatment was 25.1mmHg. One year after MP3 the average IOP dropped to 17.4mmHg (30.7% reduction). Additionally, the need for glaucoma medications decreased by 50%. Of particular interest is that, on average, MP3 reduced intraocular pressure (IOP) as well as need for IOP-lowering medications at every post-operative visit. In other words, the benefit was both immediate and long-term.

Retreatment was necessary in 23% of those who had MP3. The most common side effect was inflammation which was present early after surgery. No one in this study experienced long-term inflammation or hypotony (IOP that is too low). A sustained increase in pupil size was noted in 3 patients (0.3%).

In summary, Micropulse Trans-scleral Cyclophotocoagulation appears to be a relatively safe and effective treatment of glaucoma with both short and long-term benefit.