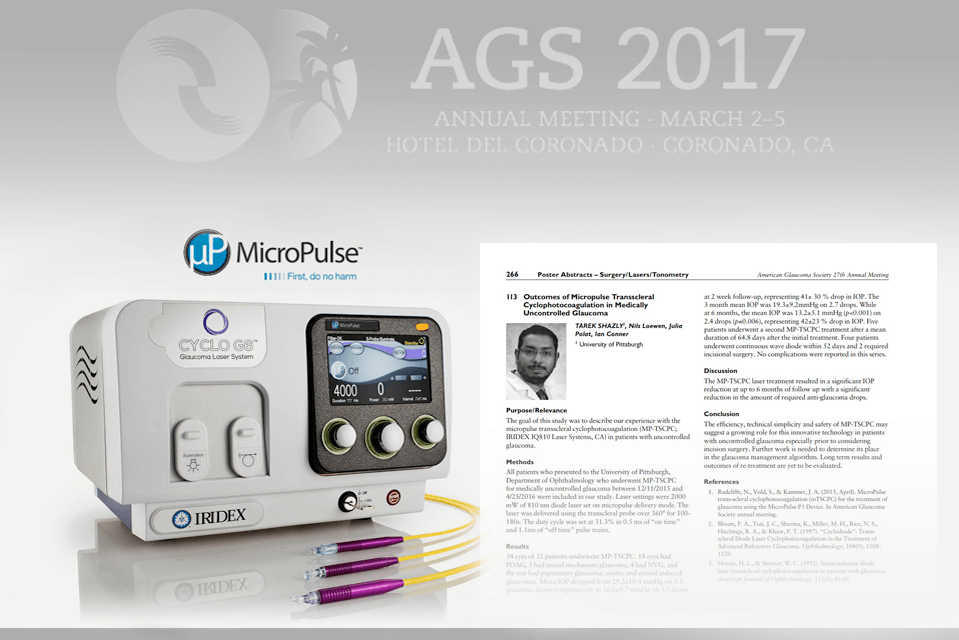 When glaucoma is not sufficiently controlled with eye drops it’s time to choose a surgical treatment. Fortunately, there are now multiple FDA-approved options that are safer than trabeculectomy or glaucoma drainage devices. Unfortunately, most of these newer Minimally Invasive Glaucoma Surgeries (MIGS) are only approved for use at the time of cataract surgery or are not covered by many insurances. For those with glaucoma but without a visually significant cataract fewer options are available.

Continuous Wave Transscleral Cyclophotocoagulation has been around long enough that it is both FDA approved and covered by most insurances. Unfortunately, it is also too risky to use on anyone with only mild to moderate uncontrolled glaucoma.

This was a small study of only 34 eyes of 32 patients with multiple types of glaucoma ranging from primary open angle glaucoma (POAG) to neovascular glaucoma (NVG). Success was defined as a drop in intraocular pressure (IOP) of at least 20%. Six months after surgery the 82% of eyes met the criteria for success. The average IOP dropped from 29.2mmHg to 13.3mmHg. The need for glaucoma medications was also reduced (on average) from 3.3 to 2.4.

Although a small study, it does demonstrate that Micropulse Transscleral Cyclophotocoagulation can be an effective glaucoma treatment in a wide variety of glaucoma types that are not responding to medical therapy. Indeed, some of the types of glaucoma in this study (neovascular, uveitic, steroid-induced, and mixed mechanism) are notoriously difficult to control. That, combined with a lack of reported complications, positions Micropulse Transscleral Cyclophotocoagulation as a near-ideal option for those with medically uncontrolled glaucoma with a target IOP in the mid-teens.