Risks of Trabeculectomy (Part 2 of 2)

Continuation of Risks of Trabeculectomy (Part 1 of 2)

Late postoperative (after the eye has healed from surgery) 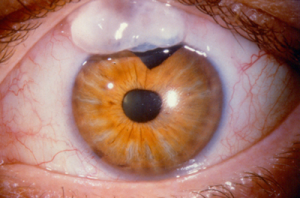 Failure of the bleb

Although on average trabeculectomies “fail” at a rate of approximately 10% per year, some blebs continue to work even twenty years after surgery.  Such long-standing blebs would likely not be possible without the modern use of antimetabolites such as Mitomycin-C (MMC) to limit scarring of the bleb.

The use of MMC works very well to prevent scarring (failure) of a bleb.  However, it also results in paper-thin delicate blebs which are prone to leak and are easily damaged.  When MMC is used during trabeculectomy, there is about a 15% risk of  bleb leak  in the first five years after surgery.[1]  Bleb leaks can lead to hypotony (as well as the problems associated with hypotony) and may even progress to infection of  the inside of the eye.

An IOP that is too low (hypotony) can occur at any time after trabeculectomy.  When it is not successfully treated, long term hypotony can lead to central retinal (macular) damage called hyptony maculopathy.  This risk increases as the risk of hyptony increases.  One of the main risks of developing hypotony is the use of Mitomycin-C.  In one study of patients who underwent trabeculectomy with MMC, 9% of patients developed hypotony maculopathy at some point during the five years of follow up after surgery.[1]

With most eye surgeries the risk of infection is greatest early after the surgery is performed.  Once the eye has healed the risk of infection due to surgery is essentially zero.  Not so with trabeculectomy.   Because use of MMC results in thin, delicate blebs and severely limits the body’s healing response, any damage to the bleb could result in a small opening that would allow bacteria into the eye.  Infections can range from “blebitis” to severe, vision-threatening infection of the entire eye (endophthalmitis).

Blebitis is just what it sounds like: an infection limited to the bleb itself.  Approximately 6% of blebs will become infected in the first five years after trabeculectomy.[1]  If caught early it can often be treated with only topical antibiotics.  Vision can be saved at this stage in the infection.[2]  Thus, it is critical that anyone who has had a trabeculectomy inform their surgeon at the earliest onset of redness, pain, or loss of vision in the eye that has had surgery. 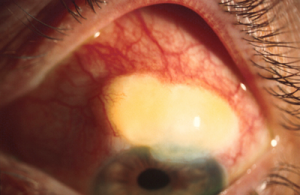 Blebitis can rapidly progress to a more serious infection of the entire eye as bacteria enter the eye through the trabeculectomy fistula.  Rates of endophthalmitis have been reported to be as high as 1% per year.[3]  If  not successfully treated endophthalmitis often leads to severe loss of  vision or blindness.  This risk continues for the life of  the patient unless the bleb scars down (fails).

It is one of the unfortunate ironies of glaucoma filtering surgery that in order to save vision one must risk losing vision.  A little over forty years ago it was thought that about one third of patients who had trabeculectomy would go on to develop cataracts[4]  More recent evidence suggests that number may be even higher than 50%.[1]  Normally this would not be such a bad thing as most everyone eventually develops a cataract anyway and cataract surgery is one of the safest of eye surgeries.  The problem is that reduced bleb function or even bleb failure is more likely after cataract surgery.  So, removing the cataract to improve vision could result in IOP elevation[5] possibly requiring use of additional IOP lowering medications[6] and risking further loss of vision.  It’s an unfortunate Catch-22 for patients considering trabeculectomy.

Fluid  in  the  bleb  exerts  pressure on the thin bleb wall which  can  result  in a bubble-shaped bleb.  These can cause or worsen Dry Eye Syndrome resulting  in  chronic  irritation,  tearing, and blurred vision.  This may be treated with artificial tears though often with limited effect.

Although most people do not notice any difference in eyelid position after glaucoma surgery, it is possible for the upper eyelid to be notably raised[7] or drooped[8] after trabeculectomy.

Bleb-dependent glaucoma filtration surgeries such as trabeculectomy can be associated with numerous complications including infection, vision loss, bleb leak, bleb scarring, hypotony , cataract and the need for subsequent surgery.[9]  The decision to proceed with trabeculectomy is never easy for the patient with glaucoma.  For some, this may be the only surgery with a reasonable chance of controlling their glaucoma.  Many, however, many find that their glaucoma can be successfully treated with a combination of drops and less risky surgical options.

When Should Trabeculectomy Be Considered? →