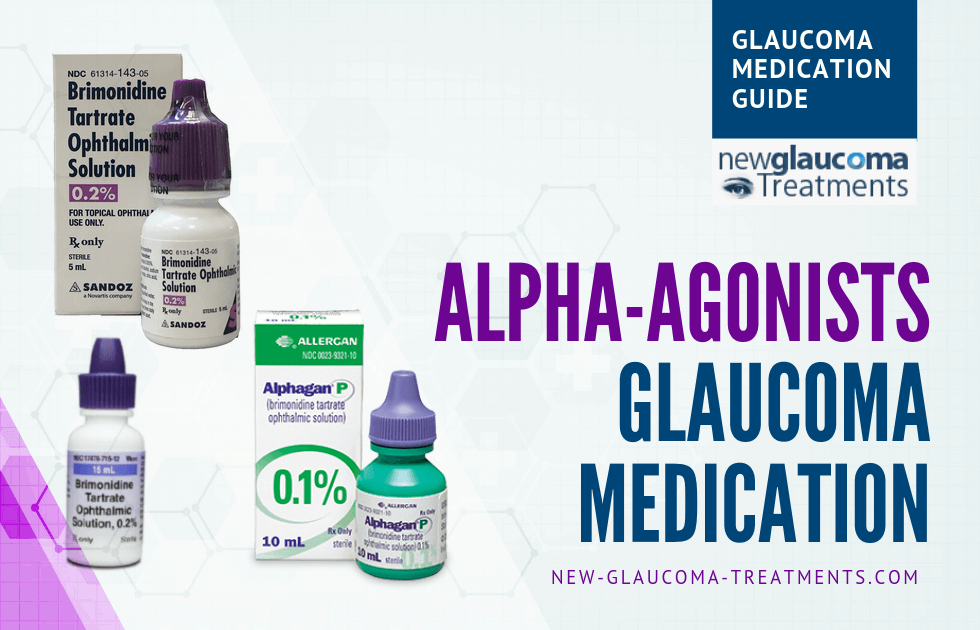 About this class and how it works:

Alpha-agonists have their effect on the ciliary body to reduce production of aqueous fluid. Additionally, like the prostaglandin analogs, alpha-agonists seem to further open the uveoslceral outflow pathway. Finally, there may be an IOP-independent “neuroprotective” benefit[1].

They work quite well. Studies indicate that alpha-agonists lower the IOP about as much as timolol but are not quite as effective as the prostaglandin analog, latanoprost[2]. They are also effective in preventing post-laser IOP elevation.

The most commonly prescribed alpha-agonist, brimonidine, is generally considered a “second line” agent, meaning that it is rarely the first glaucoma medication that will be prescribed for someone with glaucoma. However, there is evidence that brimonidine may be preferred over timolol in those with normal tension glaucoma[3].

How it is Supplied:

In multi-use bottles with purple caps.

The branded version of brimonidine (Alphagan-P) is not preserved with BAK. Instead, it is preserved with PURITE® 0.005% which appears to be less toxic to the eye than is BAK.

Brimonidine is available in three fixed combinations in the USA:

The branded version of brimonidine (Alphagan-P 0.1%) is preferred over the generic versions as the lower concentration is less likely to result in side effects and allergy. However, if not covered by insurance it can be quite costly. Two generic versions are available: 0.15% and 0.2%. The 0.2% is often quite affordable whereas the 0.15% is often just as expensive as the branded Alphagan-P.

These eye drops are often prescribed to be used twice daily. However, there is evidence that three times daily (about every eight hours) provides additional IOP lowering benefit. I generally tell my patients to use them twice daily (once in the morning and again in the evening) and (if they remember) to do so early afternoon as well. I’m well-aware of how difficult it is to remember and find the time to take a medication during what is often the busiest time of the day.

Monoamine oxidase (MAO) inhibitors. These were the first FDA approved antidepressants which are rarely prescribed today. They include:

As with most available glaucoma medications, the alpha-agonist brimonidine works primarily by reducing the production of fluid in the eye. However, it also has an important secondary mechanism of action: improving the flow of aqueous fluid through the uveoscleral outflow pathway. Finally, there is laboratory evidence that it may also have an IOP independent neuroprotective benefit. As a second-line medication or for those with normal tension glaucoma it is often an effective choice.