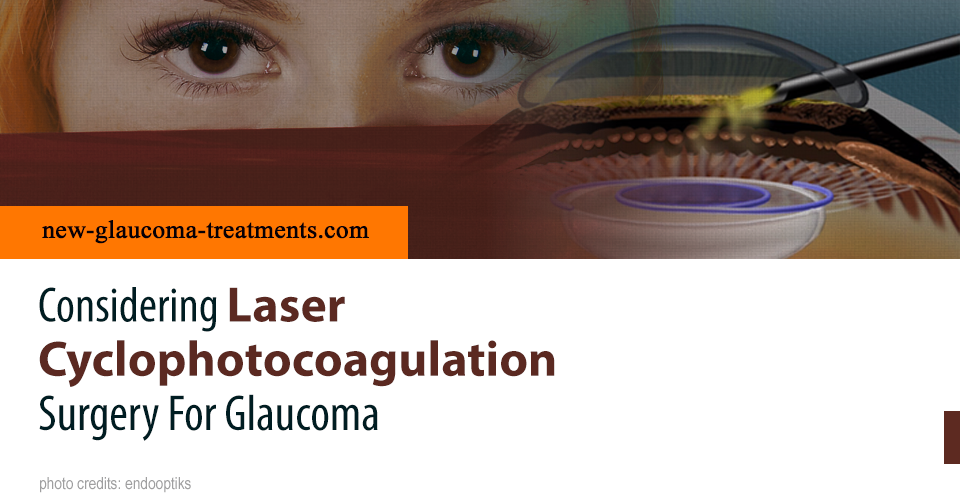 Who Should Consider Endocyclophotocoagulation (ECP)?

Endocyclophotocoagulation (ECP) makes the most sense for those who fit all of the following criteria:

Have mild to moderate glaucoma

Have a visually significant cataract for which cataract surgery is planned

The surgeon has access to and experience with ECP

If you meet all five of the criteria then it’s likely that ECP would be a reasonable glaucoma treatment option.

Who Should Consider Glaucoma Treatments other than ECP?

Endocyclophotocoagulation (ECP)is unlikely to be the best option for those who fit any of the following criteria:

Those with advanced glaucoma generally require IOP reductions beyond what ECP can be expected to offer. If the IOP is not well controlled then procedures such as trabeculectomy with Mitomycin-C (MMC), glaucoma drainage devices, or even non-penetrating surgeries such as canaloplasty would be more appropriate treatment options.

Have well-controlled glaucoma without the need for glaucoma medications

If one’s glaucoma is well-controlled without the use of medications then there would be no need for additional surgical treatment such as ECP.

The natural lens is very sensitive to touch. Basically anything that bumps into it (other than the iris) results in the development of a cataract. Because the ECP probe must pass over the lens to get to the ciliary processes it could result in the creation of a cataract during the ECP procedure. As such, ECP is not recommended for those who still have their natural lens unless the lens has a cataract and cataract surgery will be done at the same time as ECP.

The surgeon has niether access to nor experience with ECP

If your surgeon has access to and experience with ECP then great! This may be an option for you. If your surgeon has neither access to nor experience with this procedure, however, there is no great need to search out another surgeon. Why? Because there just isn’t enough high quality data on this procedure to highly recommend it. Additionally, there are now many other procedures including non-penetrating surgeries such as canaloplasty as well as a growing number of “minimally invasive glaucoma surgeries” (MIGS) that appear to work at least as well, if not better than, ECP.

Your insurance does not cover Endocyclophotocoagulation (ECP)

There are glaucoma surgical options that can be worth paying out of pocket to have.  Generally such procedures would be both safer and more effective than other options.  One would also expect long-term IOP lowering when using one’s own funds to pay for a glaucoma procedure. Without solid evidence of long-term benefit it would be hard to justify spending one’s hard-earned funds on ECP.

← What Are the Risks of Endocyclophotocoagulation (ECP)?