The CyPass Micro-Stent® is a one quarter inch long tube with a collar at one end and holes below the collar. Made of polyimide material, it is intended to be placed in the supraciliary space (next to the uvea). 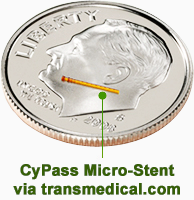 Aqueous fluid should then be able to flow through this tube, out the small holes, and into the uveoscleral space. It can be implanted alone or at the time of cataract surgery through a very small incision. Although it is manufactured by Transcend Medical in Menlo Park, California, it is still awaiting FDA approval for use in the USA. It is, however, currently available in Canada, the European Union, and elsewhere as an approved device for intraocular pressure (IOP) lowering.

When Done at the Time of Cataract Surgery

It appears that the IOP lowering benefit of the CyPass Micro-Stent® combined with cataract surgery may be sustained for years (or at least two, anyway). In those with previously uncontrolled glaucoma, implantation of the CyPass Micro-Stent® at the time of cataract surgery reduced IOP by an average of 37% two years after surgery.[6] On average, only one glaucoma medication was required two years after surgery. Just over one in ten patients had to have additional glaucoma surgery to maintain their target IOP. Again, because there was no comparison to cataract surgery alone it is not possible to know whether the IOP and medication lowering effect would have been similar had only cataract surgery been performed.

Based on the few studies available at the time this was written, placement of the CyPass Micro-Stent® during cataract surgery appears to be relatively safe. The main risks appear to be shallowing of the anterior chamber, post-operative IOP elevation, bleeding in the eye (hyphema), and persistent inflammation. No major complications from placement of the CyPass Micro-Stent® have been reported.

As of this writing, the USA FDA Pivotal study is underway.  However, as the FDA has requested two year results, we are unlikely to see this device available in the USA prior to 2018. I am hopeful that it will pass the FDA challenge and receive approval for use in the USA. In the meantime it is already being implanted in Canada, Europe, and elsewhere.

For more photos, diagram and information, you may want to see this presentation slide (PDF) shared with us by Mr. Ravi Pamnani, Director of Marketing/Medical Affairs of Transcend Medical, Inc.