Does the CyPass Glaucoma Implant Damage the Eye? 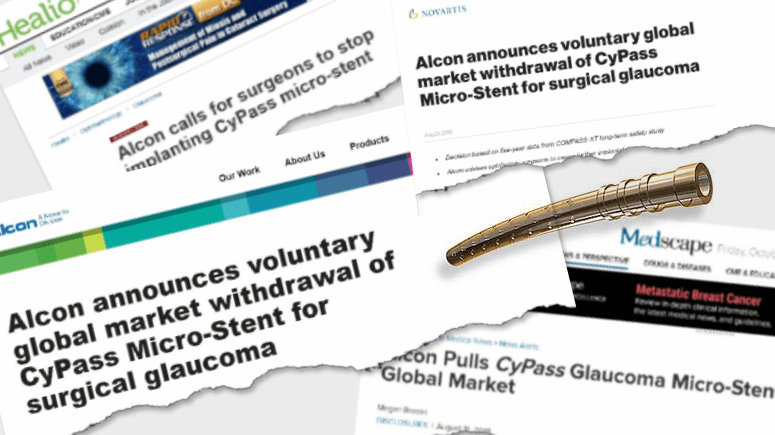 What is the CyPass Stent?

The CyPass is a small tube-shaped device that has for the last few years been implanted in patients with glaucoma. This was done at the time of cataract surgery in order to shunt fluid from the front of the eye into a space where it can then leave the eye. Initial results from the COMPASS study indicated that this device could further lower the Intraocular pressure (IOP) as well as reduce the need for medications.

As soon as it was approved by the FDA, there was much excitement among eye surgeons as the CyPass appeared to work even better than the iStent – the other FDA approved Minimally Invasive Glaucoma Surgery (MIGS) device. However, there were a few surgeons who were concerned that the device was actually a ticking time bomb due to the material from which it was made. [Why I Will NOT be Implanting the CyPass® into my Younger Patients with Glaucoma] Even those surgeons could not have anticipated that the CyPass would be withdrawn from use only two years out from its introduction in the USA.

Why Was This Glaucoma Drainage Device Withdrawn?

There was shock and disappointment felt by both patients and surgeons when Alcon (the manufacturer of the CyPass) withdrew it on September 14, 2018 because further study of the CyPass demonstrated that it was associated with damage to the cornea.

The cornea is often described as “the window to the eye”. It is the clear, front part of the eye. One reason we are able to see is that our corneas are clear and transmit light into the eye. This transparency is largely due to the work of endothelial cells located on the back side of the cornea. If these cells are damaged then the cornea loses its transparency and vision is lost.

In the ongoing study of the CyPass it was noted that these endothelial cells were being damaged at an alarming rate in at least some of those eyes in which the implant had been placed. Because these cells are not replaced by the body there was concern that this could lead to loss of vision in those patients over time. It was due to this safety concern that Alcon chose to remove the CyPass from the market.

Surgeon Reaction to Loss of the Cypass Glaucoma Implant

Initially there were two main responses among eye surgeons: those who felt Alcon had acted in an ethically appropriate manner by removing this device; and those who felt that this was a rushed and unnecessary step. Although it might seem obvious to non-surgeons that a device with the potential to cause damage to the eye should never be implanted in the first place, these decisions are seldom so straightforward. Glaucoma is a condition that causes permanent and irreversible loss of vision if not adequately treated. There are patients in which all other treatments have failed to control the disease. In these patients the loss of vision from glaucoma is guaranteed whereas loss of vision from an implant is less certain. To remove an implant entirely eliminates a treatment option for those who have exhausted all other options.

A deciding factor in the decision to remove the implant was that the CyPass stent had been FDA approved only for those with “mild to moderate” glaucoma. As the risk of permanent loss of vision within five years is pretty low for those with only mild or moderate glaucoma, any significant risk of permanent loss of vision from a surgical implant was felt to be too high.

What Has Happened Since the Withdrawal of the Cypass?

Since the removal of the CyPass glaucoma stent the FDA has completed additional analysis of the available data and concluded that not only was the voluntary withdrawal appropriate, but that there is a reasonable chance that the CyPass stent could result in serious risk of vision loss.1

Indeed, in those whose CyPass implants were not inserted as deeply into the eye as recommended, there appears to be a very high risk of damage to the corneal endothelial cells. On average, in this subset of patients almost a third of those cells were damaged or destroyed within five years from surgery. Additionally, there is reason to be concerned that this damage could continue over time. If so, then at least in this group of patients, loss of vision is all but inevitable given enough remaining years of life.

As horrific as that last statement sounds, there are some important caveats:

Younger patients or those in whom the CyPass glaucoma implants are not fully inserted are at higher risk of damage to the cornea and loss of vision. As such, the FDA is now recommending the following:

Did Alcon or the FDA Drop the Ball?

For the last half century those who suffered with glaucoma had few surgical treatment options available: trabeculectomy or glaucoma drainage implantation. Both of these surgeries were fraught with risk and loss of vision after surgery was not uncommon. In the last decade much has changed with the addition of Minimally Invasive Glaucoma Surgery (MIGS). The excitement associated with finally having a range of treatment options was shared by both patients and their surgeons. The recall of the Alcon CyPass stent is an unfortunate reminder that (1) all surgical treatments (and implants) have risks, and (2) that it’s not possible to know of all the potential risks even two years out from a given surgery.

No doubt this news has resulted in a significant amount of anxiety for those with glaucoma who have had a CyPass stent implanted into their eyes. There will be questions as to why the FDA approved this device at all. However, the reality is that the US FDA is already one of the most safety-focused oversight bodies in the world and is near universally criticized by doctors and patients who wish that treatments available overseas could also be made available in the USA. Were the FDA to be any more restrictive, US patients would be forced to wait even longer or travel overseas (as many already do) to obtain treatments that are eventually proven to be safe and effective.

Rather than conclude that the system of oversight failed, it would be fairer to state that the post-approval process worked as intended. Years of CyPass data were collected before the FDA granted approval. This pre-approval data demonstrated a beneficial effect without notable vision-threatening complications. Additional data was collected after approval. It took another three years beyond the initial two years of pre-approval data to discover this problem. Upon discovery Alcon voluntarily pulled the implant from the market.

Those who have followed my online posts know that I have been far from deferential to Alcon in the past [Why You Need to Know What Lens Your Eye Surgeon Will Implant During Cataract Surgery]. Nonetheless, I respect the decision made by the Alcon executives to pull the CyPass glaucoma implant from the market rather than follow the lead of other industries that are too concerned about profits to do what is right and ethical.

No doubt there will soon be TV commercials from law firms offering to represent anyone who has had CyPass implant surgery. My hope is that Alcon will proactively offer to support the medical and surgical glaucoma and cornea needs of those who have had the CyPass implanted. In that manner the patients who carry this risk (and the anxiety associated with it) would be the primary beneficiaries (rather than the law firms that invariably take the lion’s share of any class action settlement leaving a relative pittance for those who were actually harmed).

Treatment of glaucoma has always (and will continue to be) a balancing act between the expected progressive and permanent loss of vision due to glaucoma and the risks of treatment. We (the medical device industry, surgeons, and patients) must continue to focus on safety while we also attempt to innovate and reap the benefits of innovation. However, it is unrealistic to expect that we can collect the rewards of innovative medical and surgical treatments without also accepting the unknowable risks of newer treatments.

As a final note, it is worth emphasizing that most of the patients who have had CyPass implant glaucoma surgery are currently and will likely continue to do well with better control of their IOP. Even those with corneal endothelial damage are unlikely to permanently lose vision as there are very effective endothelial transplant surgeries that can reverse lost vision from damaged endothelial cells.

Unlike corneal endothelial disease, damage from glaucoma is permanent and irreversible. Because of that (and despite the risk to the cornea) suprachoroidal stents such as the CyPass will continue to be developed and offered (at least outside of the USA) because that trade-off will be worthwhile for older patients with advanced glaucoma who have not responded to other available treatments.

It is now apparent that the Alcon CyPass glaucoma drainage implant is not appropriate for those who are of younger age with mild to moderate glaucoma. We know that now and it will be a while before any similar implants are approved in the USA. It is my hope (and I know that this is shared by many fellow surgeons as well as patients with glaucoma) that this unexpected complication of the CyPass stent will not impede the much-needed progress in our efforts to save vision that would otherwise be lost for the millions of patients with glaucoma worldwide.

1 Technically, the FDA stated that “there is reasonable chance that the product will cause serious health problems.” “Health problems” can reasonably be interpreted as “loss of vision”.