Ab-Interno Canaloplasty (ABiC) Surgery as a Treatment of Mild to Moderate Glaucoma: 12-Month Results from the University of Oklahoma

Dr. Mahmoud A. Khaimi presented 12-month data on the benefit and risks of Ab-Interno Canaloplasty (ABiC) with or without cataract surgery at the recent American Glaucoma Society (AGS) 2017 Annual Meeting in San Diego, CA (March 2-5). 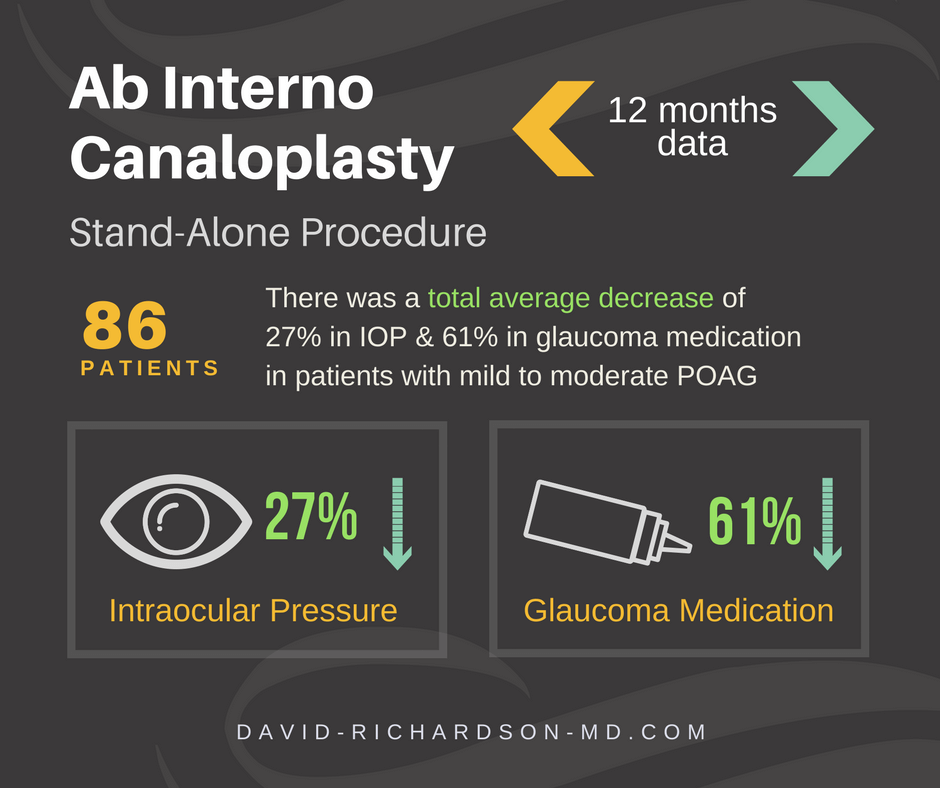 This study included 86 eyes of patients with mild to moderate primary open-angle glaucoma. ABiC was either performed alone or with cataract surgery.

Average intraocular pressure (IOP) was significantly reduced from 19.0mmHg to 15.3mmHg one year after surgery. Medication use dropped (on average) from 1.92 medications to 0.44. Over half of all patients were drop free after surgery. No serious complications were encountered.

One criticism of all Minimally Invasive Glaucoma Surgeries (MIGS) is that some IOP lowering is possible from cataract surgery alone. If MIGS are studied only alongside cataract surgery it is not possible to determine how much benefit the glaucoma surgery actually provided. This study separated out the results of standalone ABiC (without cataract surgery) in order to address this issue.

Prior to surgery, the average IOP was 22.0mmHg using 2.0 medications (on average) in the standalone ABiC group. After glaucoma surgery these averages dropped to 16.0mmHg and 0.79 medications.

Ab-Interno Canaloplasty (ABiC) is not like other Minimally Invasive Glaucoma Surgeries (MIGS) in that it can be performed with or without cataract surgery. This study not only demonstrates its beneficial IOP and drop lowering effect, but also quiets the critics who think that the main benefit is from the cataract surgery. ABiC alone (without cataract surgery) lowered the average IOP by 27% and reduced the need for medications by 61% one year out from surgery.

In summary, Ab-Interno Canaloplasty (ABiC) appears to be ideally suited to treat those with mild to moderate glaucoma with target IOP in the mid-teens. An advantage it has over other Minimally Invasive Glaucoma Surgeries (MIGS) is that it can be done on its own without the need for same-setting cataract surgery.

Has Your Trabeculectomy Failed?

You may still be a candidate for Canaloplasty
Consult with Dr. Richardson