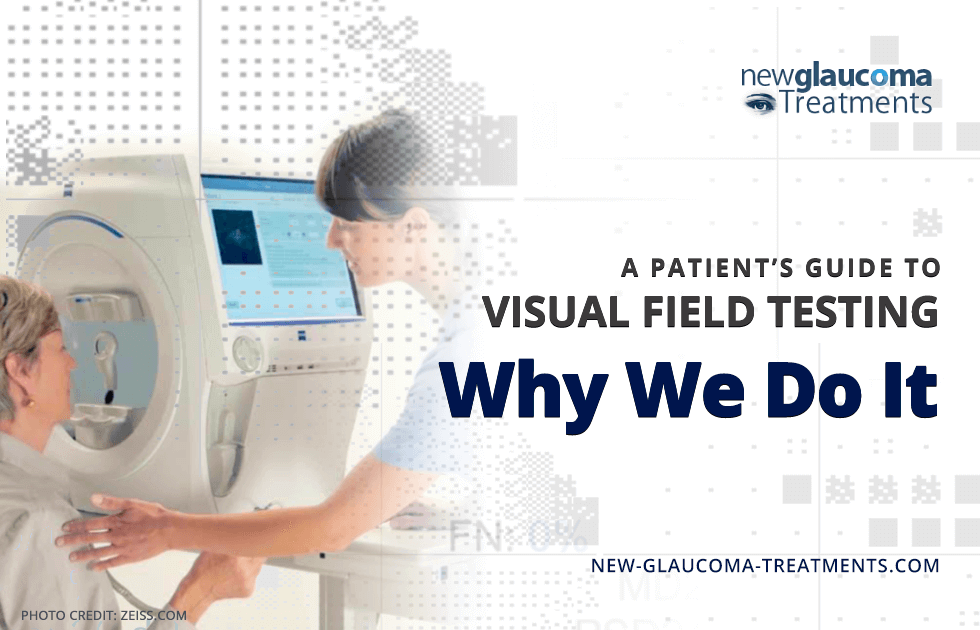 There are many things to dislike about having glaucoma. One dislike shared among almost all glaucoma patients is visual field testing. I can understand that. I’ve taken the test myself multiple times so have first experience with how tedious and frustrating the test can be. Although I cannot make this important glaucoma test any less tedious, my hope is that by providing some more information about what it is and why it is important that it might provide some motivation for those who have to go through this testing on a regular basis. Just as I would personally never go to the gym if I was not motivated by the potential benefits of doing so, I’m hoping that the information I’m about to share will provide motivation to those with glaucoma to proactively (if not enthusiastically) participate in regular visual field testing.

Although the last 30+ years of insurance companies micro-managing doctors has done much to destroy patients’ trust in their doctors’ motivations, I want to put one suspected reason to rest: that of profit. Visual field testing is disliked almost as much by doctors as it is by patients as it is equipment, space, and staff intensive. Given the realities of modern insurance reimbursement it’s far from certain that a practice will break even on threshold visual field testing (the type used in glaucoma testing).

So, if it’s disliked by both the doctor and patient, why do it? Because it’s critical in the detection and monitoring of glaucoma. Early in the disease, glaucoma is without obvious symptoms. Even those with moderate glaucoma and a significant amount of vision loss may not be aware of losing vision. This is primarily due to two factors:

When small or at the edge of our vision, we generally are not aware of losses in our visual field.

For example, we all have a blind spot where the optic nerve enters the eye. It’s just to the side of the center of our vision (to the left of center in the left eye and to the right of center in the right eye). Yet, we are not aware of this blind spot unless we know how to look for it. That’s because blind spots (or “scotomas” as eye doctors call them) are not perceived as black, grey, or dark patches in our field of vision. We just don’t see them. That’s because our brains play a clever trick on us.

If you’ve ever played with Photoshop you’ve probably used this trick: the “fill with pattern” tool. That’s correct, our visual system actually fills in blind spots not just with color but with even complex patterns that surround the blind spot. Essentially, our blind spots become camouflaged.

expertvillage (2008). Photoshop Tutorial : How to Fill in a Shape With a Pattern in Photoshop. Available at: https://youtu.be/EEd0oFwKh-M

The reason we don’t see our blind spots is that our own brains hide them from us!

At the Edges of our Vision

Additionally, we rarely think about or are aware of the limits of our visual field to the side. Indeed, those with severe field

loss on the side generally only find out about it when they start bumping into door frames or other obstructions. It makes sense that we would not necessarily be aware of a reduction in our visual field. After all, our visual systems are set up to detect what is within the working field of vision, not what is outside of it. Just as we are not aware of sounds that are outside of our range of hearing (until we don’t hear something important), we should not be surprised that we would be unaware of a decrease in the size of our visual field until it is severely reduced.

Early “loss” of vision from glaucoma is in the form of visual field depression, not loss

Most early visual field loss is not in the form of blind spots (“scotomas”) but is simply an area of the vision that is not seen as easily. This is not “blurred” vision but rather of what eye doctors term a change in the “threshold” of vision. In other words, the light intensity or contrast or color saturation has to be greater in order for the object to even be seen. This is almost impossible for the average person to detect. Occasionally someone who is very sensitive to their visual environment (in my experience this is often artists, engineers, and hunters) will notice something is “off” in their vision. Even for them, however, it’s often hard to describe.

It’s Not Just About Detection

Once glaucoma is detected, the goal of treatment is to prevent (or at least reduce the rate of) further loss of vision. Treatment is recommended (generally in the form of lowering the intraocular pressure). But how does the doctor know that the glaucoma treatment is working? One way is to monitor for changes in the visual field. If the visual field is getting worse over time then more aggressive therapy (often in the form of additional IOP lowering eye drops or surgery) would be indicated. If caught early enough, some reduction in the visual field may be reversible. Unfortunately, however, most vision lost to glaucoma is permanent which is why it is critical to detect changes as quickly as possible.

It is exceedingly unlikely that someone with mild (or even moderate) glaucoma would notice loss of vision until a significant amount of vision had been permanently lost. As such, visual field testing is essential in both the detection and monitoring of glaucoma.

Visual Field Testing - Why We Do It | Driving with Dr. David Richardson – Series 2 Ep 01 →