Walk into most any jewelry store and chances are good you’ll see bands made out of titanium. Some of these rings are likely to be set with Sapphire stones. As pleasant as these are to the eye, they won’t help you see…or will they? 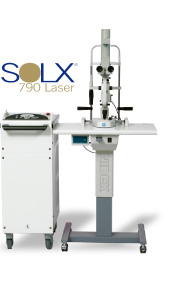 So, do we really need another form of laser trabeculoplasty? If it’s a more effective and safer glaucoma treatment, then “yes”.

Titanium-Sapphire Laser Trabeculoplasty (TSLT) was recently compared to SLT in a small (unmasked, but randomized) trial of 37 patients with glaucoma. These glaucoma patients were followed for two years after the laser treatment. “Success” was defined as an intraocular pressure (IOP) less than 21mmHg with greater than 20% reduction in IOP and no need for additional surgery.

Of note is that no significant complications were noted in either glaucoma treatment group.

So is the Titanium-Sapphire laser of real value in the treatment of glaucoma or is it just another bright, shiny, and expensive technology with no real advantage over established and proven technologies such as SLT? Only time and additional studies will tell.