The Evolution Of Glaucoma Treatment Surgery

NPGS is believed to be the most promising of all new glaucoma treatment surgery because its IOP lowering effect appears to be on par with traditional filtering surgeries while having the added benefit of fewer risks (Canaloplasty vs Trabeculectomy).

Glaucoma is a common disease of the eye which results from the dysfunction in the eye’s drainage system that leads to irreversible blindness. Clogging of this drainage system eventually results in an increase in the eye’s pressure which damages its delicate structures, especially the nerve responsible for vision (optic nerve).

Over the last three decades, there has been a rapid development in glaucoma treatments, with a wide range of options available, from eye drops to surgery. Potent drugs with minimal side effects like prostaglandins (latanoprost, travoprost) have also been a boon for many glaucoma patients since their approval. On the other hand, patients who are unresponsive to medications have traditionally be faced with the risky option of filtering surgery (trabeculectomy). 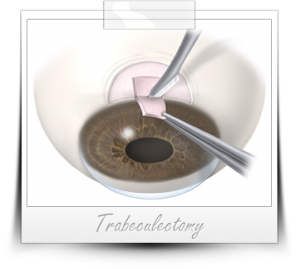 The oldest type of filtering surgery for glaucoma is called trabeculectomy. Trabeculectomy requires the creation of a “full thickness” incision into the eye (through the cornea and sclera). An alternate bypass is created through a small flap which results in a permanent cyst (called a “bleb”) on the surface of the eye.  This serves as a watershed area that allows for eventual drainage of the excess fluid. Because of the risks associated with the procedure, (including infection and loss of vision), filtering surgery is reserved primarily for complicated and advanced types of glaucoma or where extremely high intraocular pressures are present. In these cases, the benefit outweighs the risk of a patient losing her sight for life.

Trabeculectomy has been the gold standard of glaucoma surgery over the years because it is very effective in lowering the eye’s pressure. However, patients have often paid a high price in terms of  post operative complications such as infection and loss of vision. From this need for a better and safer way to drain the eye fluid, various less invasive surgeries like laser trabeculoplasty, viscocanalostomy and canaloplasty were developed.

Until the development of artificial drainage devices, micro catheters, laser and micro surgery, glaucoma surgery meant only trabeculectomy. With these new technologies (discussed below), it is now possible to operate on glaucoma earlier on or before optic nerve damage and vision loss is severe. Modern research suggests that many of these newer treatments work best with the most common kind of glaucoma seen in eye doctors’ clinics: primary open angle glaucoma (POAG) . 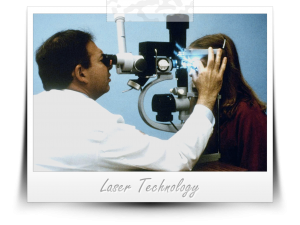 Argon Laser trabeculoplasty(ALT) and  Selective Laser Trabeculosplaty (SLT) are two of the many laser techniques currently being used as an alternative treatment to medical eye drops. Laser light creates microscopic burns along the surface of the eye’s drainage “grate” (trabecular meshwork) in order to improve the flow of fluid out of the eye. However, because it is not effective in lowering the pressure in the eye in the long term (beyond 3-5 years), its use has not been as popular as initially predicted. Other forms of laser therapy include cytophotocoagulation, which uses laser to permanently destroy the anatomical source of fluid (ciliary body).

Early glaucoma drainage devices were originally made of silicone and polypropylene (plastic). These devices are inserted into the eye (similar to trabeculectomy) and function like trabeculectomies. They are anchored by a plate onto the white surface of the eye called the sclera. Despite the ability of a tube to rapidly drain and lower pressures, it shares some of the risks of trabeculectomy (and adds a few such as possible double vision).  Long term, these shunts can erode resulting in exposure onto the surface of the eye (risking infection). Recently, glaucoma surgeons have been experimenting with more tissue-friendly shunts made of novel materials like gold (Deep Light SOLX system) and titanium (Glaukos iStent) which were released in 2008 and 2010 respectively (but have not received FDA approval in the USA as of late 2011).

Deep sclerectomy and viscocanalostomy were the prototypes of NPGS. More recently, canaloplasty has stirred excitement among glaucoma surgeons due to its lower risk and better IOP lowering ability.  Using a minute catheter (1/4 millimeter in diameter – about the thickness of a dot of ink made by a ballpoint pen) this flexible stent is passed through a small flap in the eye’s sclera (sclerotomy) to re-open the eye’s natural drainage system (Schlemm’s canal). To enhance the process, a viscoelastic fluid is pumped directly into the canals (viscocanalostomy), dilating them. Finally, the canal is kept open by pulling a suture through the canal and tightening it as you would a “hoodie” (canaloplasty). Although safe and effective, canaloplasty is a technically challenging surgery.  To date, only a handful of glaucoma surgeons have been trained and developed significant experience with this promising new surgery.