Brief Introduction to the Eye

For an organ that is about the size of a large gumball, the eye is a complicated structure. Fortunately, a basic understanding of glaucoma and it’s treatments can be gained with an awareness of just a few “parts” of the eye.

How the Eye Works

It’s helpful to think of the eye as a video camera hooked up to a TV. A video camera has a lens to focus an image, film or a sensor to capture or record the image, and a cable to transmit the image to a TV.

Your eye works in a similar way. It has two surfaces that focus an image: the cornea and the natural lens of the eye. The cornea, which is a clear, curved surface, bends light passing through the eye. The lens fine-tunes the light before passing it onto the retina, located at the back of the eye. The retina records the light, much like film in a camera, and then converts it into an electrical signal. From here, the signal is transmitted to your brain through the optic nerve, which is similar to the cable that connects a video camera to a TV. The brain then processes the signal to let you see the image.

Now let’s take a look at each of the basic parts of the eye and what they do.

Parts of The Eye 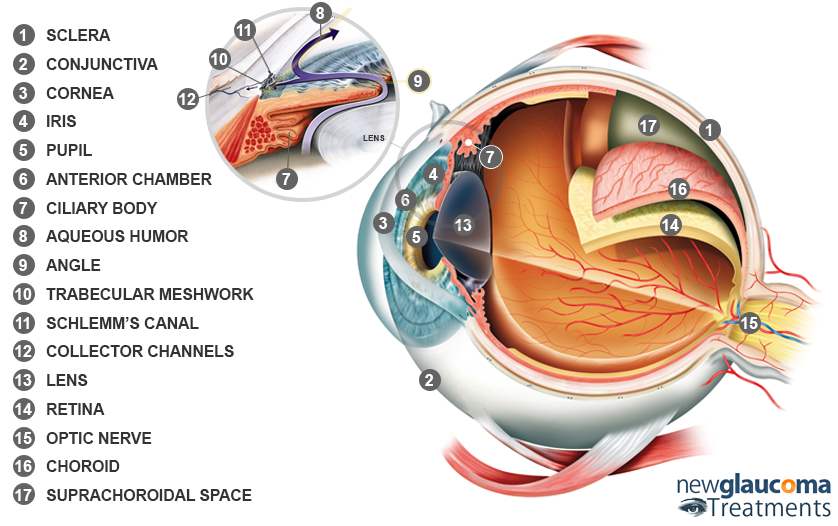 The sclera is the “white of the eye”. It functions as the outer protective layer of the eye.

The conjunctiva is the clear membrane that covers the sclera. It looks a bit like plastic wrap with small blood vessels in it. Because it is clear you don’t generally notice this membrane unless you have an irritated eye, allergies, an eye infection, or have eye surgery. Any of those conditions will cause the blood vessels to become dilated. This results in the conjunctiva changing its appearance from a thin, transparent tissue to a red, thickened blanket over the sclera.

In the center of the iris is an opening called the pupil. Light enters the back of the eye through the pupil which appears like a black circle in the middle of the iris. When we are in the dark, the pupil enlarges to allow more light into the eye. This also happens when we are scared, excited, or aroused.

The anterior chamber is simply the fluid-filled space between the back side of the cornea and the front of the iris. Many glaucoma surgeries are performed in this tiny space.

The ciliary body is located just behind the iris. It is made up of little finger-like projections that produce a fluid called the aqueous humor.

The front part of your eye is filled with a clear fluid (intraocular fluid or aqueous humor) produced by the ciliary body. This fluid provides essential nutrients and other chemicals required by the various tissues in the eye. After leaving the ciliary body, this fluid flows around the pupil and into the eye’s drainage system through what is called the “angle.” The fluid then exits the eye through a grate-like structure called the trabecular meshwork where it is then absorbed into the bloodstream through the eye’s drainage system.

Where the cornea meets the iris a natural angle is formed. The apex (tip) of this angle is where most of the “drainage system” of the eye is located.

At some point the aqueous fluid must leave the eye. It does so though a grate-like structure called the trabecular meshwork. At least in normal eyes the trabecular meshwork appears to be the main point of resistance to fluid exiting the eye.[1] Thus, most glaucoma treatments have focused on addressing this part of the eye.

This is a small tubular structure that sits beside the trabecular meshwork and encircles the eye. It functions as the natural drain of the eye.

From Schlemm’s Canal the aqueous fluid moves into small channels. These channels direct this fluid into the bloodstream.

Like the cornea, the function of the lens is to focus light. The lens is approximately the size and shape of an M&M®. Unlike an M&M®, however, the lens is generally clear (unless it has become a cataract). The lens is suspended behind the iris by microscopic cables called zonules. Light enters the center of the lens through the pupil. When light exits the lens it should be focused onto the retina.

The retina is the “screen” onto which light is focused. If the cornea and lens are clear and of the correct power then this image should be in focus. Unlike a movie screen, however, the retina does not display an image. Rather, it captures the light and converts it into signals the brain can interpret giving us the ability to see the world around us.

All of the focusing and capturing of light would be of no use if this information could not find its way to the brain. The function of the optic nerve is to do just that – transmit a signal from the eye to the brain. This cable-like structure is composed of over a million fibers that pass from the retina to various parts of the brain.

This is a soft, vascular (filled with blood vessels) tissue that sits between the retina and the sclera. The choroid may fill with fluid or blood after certain types of glaucoma surgeries.