To perform a trabeculotomy is to create an opening in the trabecular meshwork. For over 50 years sutures have been used to perform this operation.[1] Essentially, one or more incisions are made in the eye wall (sclera) exposing the Canal of Schlemm. A suture is then inserted through one of these incisions into the canal. The suture is then threaded along the canal until the tip exits through one of the incisions. Once both ends of the suture are exposed tension is applied. Essentially, the suture is tugged as one would do with the strings on a hoodie. The suture tears through the inside wall of the canal (trabecular meshwork) resulting in a direct opening between the inside of the eye and the collector channel drainage system. Aqueous fluid can then leave the eye through this route resulting in a decrease in intraocular presure (IOP).

What is “Micro-invasive Suture Trabeculotomy (MIST)”? 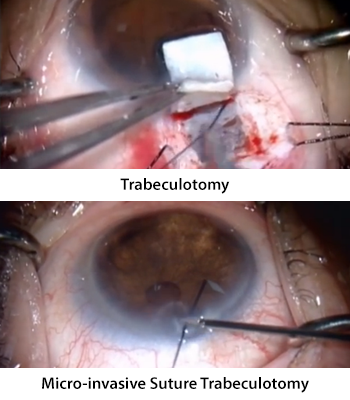 After most canaloplasty surgeries a suture is left inside the canal of Schlemm. The purpose of this suture is to exert tension on the inside wall of the canal. This essentially stents open the canal. This suture can be seen both in the office and at the microscope using a special lens called a goniolens. In theory a small instrument could be inserted through a tiny incision into the eye and used to grab the suture from the inside of the eye (”ab-interno”). With a gentle pull the suture would tear through the trabecular meshwork resulting in a trabeculotomy.

Unlike more traditional trabeculotomy glaucoma surgery, MIST does not require making an incision in the wall of the eye (sclera). Because only a small 1mm incision is made in the cornea the surgery is considered to be “micro-invasive”.

Although the technique of ab-interno trabeculotomy has been discussed by experienced canaloplasty surgeons for years, the first surgeon to study this procedure was Dr. Bogomil Voykov. He evaluated 31 patients who had previously undergone canaloplasty with stent (suture) placement in the canal of Schlemm.[2]

The results were impressive. The early (six month post-op) reduction in IOP after Micro-invasive Suture Trabeculotomy (MIST) averaged just under 37% (11.1mmHg). A full two years after MIST the average IOP reduction noted was 45% (13.5mmHg)! Additionally, on average study participants required one less glaucoma drop to achieve IOP control. MIST was not successful, however, in all eyes that underwent this glaucoma surgery. Six of the 31 eyes (19.4%) studied required additional glaucoma surgery.

Unfortunately, the only published literature describing Micro-invasive Suture Trabeculotomy (MIST) does not address this question. No patients in the study had received YAG Laser Goniopuncture (GP) prior to undergoing MIST. Goniopuncture only creates a small opening to the natural drainage system whereas MIST creates a 360 degree opening. It would be reasonable to assume that making a larger opening should result in a greater lowering of IOP. That is, however, currently an assumption as there are no available data on MIST after goniopuncture.

Fortunately, there appear to be very few risks of Micro-invasive Suture Trabeculotomy (MIST).

The most common post-operative “complication” was blood in the front part of the eye (hyphema). This was noted in just over four out of every five eyes (81%) undergoing MIST. However, this resolved within a week.

Intraocular pressure (IOP) elevation was the next most commonly encountered complication. This was seen in about a third of eyes (32%). Roughly a third of the eyes that had an IOP spike required additional surgery within a month of MIST.

Just over one in twenty eyes (6%) experienced a period of hypotony (IOP that is too low). This resolved in all eyes within a month after surgery.

Although not reported, two other risks are at least theoretically possible:

Micro-invasive Suture Trabeculotomy (MIST) is a low risk procedure that has the potential to further reduce the IOP in eyes that have failed to respond to canaloplasty. It is neither a long nor a technically challenging surgery. However, it does require going back to the operating room to perform. Additionally, we do not know how well it may work after goniopuncture has been performed. Ultimately, MIST is worth considering for those in whom their canaloplasty (with stent) has failed to achieve the target IOP.