An IOP measuring device that could be permanently implanted in the eye?

Although a contact lens that measures intraocular pressure (IOP) would be a great tool for monitoring glaucoma, not everyone is able to wear a contact lens.  For some people the idea of placing something on the surface of the eye is just too uncomfortable for them to even try. Others may have a medical condition such as dry eye or keratoconus that would make wearing a contact lens intolerable or impractical. 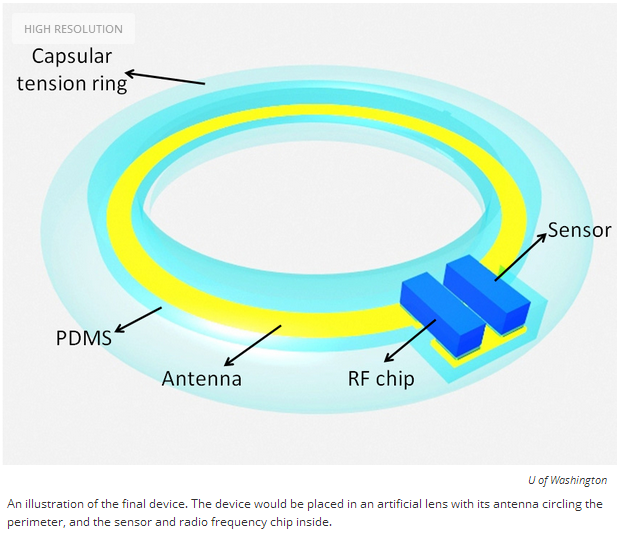 What if there was an IOP measuring device that could be permanently implanted in the eye?  Soon there may be.  Engineers as the University of Washington are working on an implantable IOP monitoring ring that could be placed inside the eye at the same time as cataract surgery.  Similar rings (called capsular tension rings, or “CTRs”) are now used during cataract surgery to help support the intraocular lens (IOL).   They are well-tolerated with few risks.  As many people with cataracts also have glaucoma this would be something of great value to many who need cataract surgery.

According to a study published in the Journal of Micromechanics and Microengineering[1] engineers have designed a sensor that could be embedded into a capsular tension ring.  This ring would be placed in the eye during cataract surgery and left permanently in place.  The CTR would also have a wireless radio that would transmit the changes in IOP to an external receiver.

In theory this data could be available to one’s doctor in real time.  Alerts could be programmed into the reciever that would trigger above a certain IOP.  Imagine how comforting it would be to know that if your IOP spiked your doctor could be immediately notified by text message or secure email.  No longer would you need to wait until your next appointment to determine whether you needed additional therapy.

Like a thief, glaucoma steals vision silently.  You generally don’t know about the loss until you return home (or, in the case of glaucoma, to the doctor).  This implantable technology could act like a home surveillance system providing both peace of mind and protection from such loss.