EX-PRESS® Glaucoma Filtration Device – What You Should Know About It

Because trabeculectomy has been associated with so many risks there has been an ongoing effort to find safer, more predictable methods of surgically lowering the intraocular pressure (IOP) in patients with glaucoma.  One of the main sources of post-operative complications is the inability to finely control the flow of fluid through the surgically created fistula.  Many attempts have been made to better control the flow of fluid by changing the shape of the scleral flap, modifying suture techniques, etc.  No single technique has been shown to be superior.

When fluid moves through a pipe there is resistance to flow.  The smaller the diameter of the pipe, the greater the resistance.  This physical property is the basis of a device designed to better control flow of fluid out of the eye after trabeculectomy.  The EX-PRESS® Glaucoma Filtration Device is essentially a small metal tube that is inserted into the eye where tissue would normally be removed during trabeculectomy.  Because the tube is engineered to provide a set amount of resistance to flow it should result in more predictable outcomes after trabeculectomy. 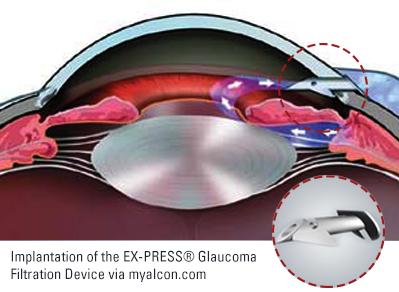 The EX-PRESS® Glaucoma Filtration Device was first approved by the FDA in 2002.  At that time surgeons were simply implanting it underneath the conjunctiva allowing fluid to flow directly from the anterior chamber through the tube into the bleb.  Although the surgery was fast and easy, complications such as hypotony and erosion of the implant were common.[1]  In 2005 the technique was modified by placing the device under a scleral flap.[2]  Although not technically a trabeculectomy as no trabecular tissue was removed, the surgical technique and post-operative course were in other ways similar to trabeculectomy.

Although the risk of hypotony appears to be decreased with use of the EX-PRESS® Glaucoma Filtration Device compared to standard trabeculectomy, all other bleb-related issues remain.  In addition to these risks, there are unique risks associated with use of this implant.  Such implant-related risks include the following: 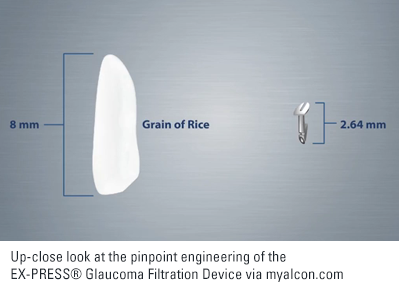 The iris is a very delicate tissue.  It is also moving throughout our waking hours.  Contact between the EX-PRESS® Glaucoma Filtration Device and the iris could result in inflammation.  Chronic inflammation could result in loss of vision.  Additionally, the iris tissue could block the opening in the tube leading to an increase in intraocular pressure (IOP).  If either of these two conditions exist the implant may require surgical repositioning.

If the tube is obstructed then fluid will not flow out of the eye.  This would result in increased IOP and possible further damage to the optic nerve.  Now that the EX-PRESS® device is implanted under a scleral flap just under 2% become obstructed.[6]  Fortunately, many obstructions can be treated with a laser.  Intraocular pressure control is often improved after successful laser treatment.[7]

All surgical implants no matter how big or small carry the risk of moving out of the desired position over time.  The EX-PRESS® Glaucoma Filtration Device is no exception.  According to the device manufacturer significant exposure occurs in just over 1 in 20 patients and partial exposure in just under 1 in 100.[8]

The EX-PRESS® Glaucoma Filtration Device is made of stainless steel which is an iron-based alloy.  As anyone who has ever played with magnets knows, small objects made of iron will move when placed near a magnet.  Yet, you may remember from those same childhood experiments that your magnets didn’t stick very well (or at all) to your mother’s stainless steel pots and pans.  Because certain stainless steels are not affected by magnets this material is often chosen as a surgical implant material – such as with cardiac (heart) stents.

The stainless steel used to make the EX-PRESS® Glaucoma Filtration Device is considered to be minimally ferromagnetic[9]so the implant should not be affected by most magnetic fields.[10]  However, multiple studies have noted movement of the Ex-PRESS® device under strong magnetic fields such as those experienced with the newer, stronger MRIs.[11]  Because of this it is recommended that all MRIs be avoided during the early post-operative healing phase.  After the eye has healed from surgery it is believed that the EX-PRESS® device is “MRI safe” in MRIs up to 3T (three Tesla).

It’s important that your surgeon inform you if you’ve had an EX-PRESS® Glaucoma Filtration Device placed in your eye.  Because it is made of steel it could move under the influence of a powerful magnet (such as with an MRI).  Most MRI machines (3.0 T or less) are too weak to cause concern, but you should avoid all MRIs for at least a few months after surgery.

Although the EX-PRESS® Glaucoma Filtration Device is considered a shunt, the surgery is essentially a simplified trabeculectomy. As such, surgery with this device still carries all of the risks of bleb-related surgeries. Additionally, there are a few risks that are present with use of the EX-PRESS® device that are not shared with standard trabeculectomy surgery.