A compilation of latest medical and research updates that are worth sharing with glaucoma patients and care providers. 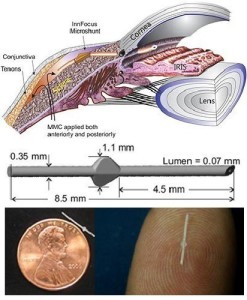 The Ex-PRESS Mini glaucoma shunt finally has some competition – at least in Europe. The first patients to receive the InnFocus MicroShunt® were in Spain. Don’t hold your breath, however, if you live in the USA. It’ll be years before we see this device FDA approved.

Topical Non-steroidal drops may further lower IOP…at least Nepafenac…at least when combined with prostaglandin analogs. That’s the conclusion of a recently published article in The Journal of Glaucoma. Unfortunately, branded topical NSAIDs such as Nepafenac are ridiculously expensive – so long term use is beyond the budget of all but the top 1%. Additionally, it’s probably not safe to use generic NSAIDs for long periods of time as they are associated with melting of the cornea (very bad thing). So this ends up being interesting but ultimately of little practical benefit at the moment.
The Interaction of Nepafenac and Prostaglandin Analogs in Primary Open-angle Glaucoma Patients.

Expanding Canaloplasty – The “Father of Canaloplasty” is working on an expansion device that may enhance the IOP lowering effect and longevity of Canaloplasty glaucoma surgery.
Novel device for expanding Schlemm’s canal: a morphological study

If you take supplements for Glaucoma (or any other condition) avoid the private-label (generic) supplements. An investigation showed that a full 80% of the private-label supplements tested from Walmart, Walgreens, Target, and GNC contained NONE of the supplement listed on the label! This is nothing short of fraud. I hope the US government takes corrective (and punitive) action against these retailers for selling what is essentially powdered “snake oil”.
New York Attorney General Targets Supplements at Major Retailers

If you are considering Selective Laser Trabeculoplasty (SLT) does it matter whether you’ve already had cataract surgery? That was the question addressed by a study published in this month’s issue of the Journal of Glaucoma. The answer? It doesn’t matter. Both those with their natural lenses as well as those who had prior cataract surgery responded well to SLT.
Efficacy of Selective Laser Trabeculoplasty in Phakic and Pseudophakic Eyes

Those with glaucomatous visual field defects in both eyes are more likely to be involved in and at-fault for motor vehicle collisions than those without such limitations in their vision. Not surprising, I’m sure, but something of which those with glaucoma as well as their family members and caregivers should be aware.
Binocular Visual Field Impairment in Glaucoma and At-Fault Motor Vehicle Collisions 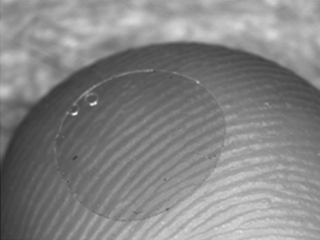 This small transparent disc is placed on the surface of the eye and contains drug-loaded nanoreservoirs, delivering medicine more efficiently than eye drops.

Could glaucoma eye drops one day be replaced by nanowafers? That’s the hope presented by a team at the Baylor College of Medicine. These small wafers would be placed against the surface of the eye and could slowly release medications over time. In theory this method of delivering medications could be more efficient with fewer side effects. I wonder though, just how do you get the wafer on the eye? Given the trouble many have with using eye drops or using contact lenses, I can’t imagine that placing a tiny wafer on the surface of the eye or underneath the eyelid is going to be much easier.
Nanowafer technology more effective than topical eye drops

Quality of life diminishes as visual fields are reduced. Not surprising for many I’m sure, but that’s the great thing about science: assumptions (even logical ones) must be supported by evidence. How does this change the treatment dynamic? For one, I’m not just working on protecting my patients from loss of vision. I can now state what I’ve always felt to be true – that my work is primarily about maintaining (as well as improving) the quality of my patients’ lives.
Longitudinal Changes in Quality of Life and Rates of Progressive Visual Field Loss in Glaucoma Patients

A newly identified gene has been linked to a common form of glaucoma: pseudoexfoliation syndrome. The gene, CACNA1A, has its effect on Calcium channels which have already been implicated in glaucoma. This could potentially lead to a new target for glaucoma therapy research.
Newly identified gene increases glaucoma risk

Experimental glaucoma medication AR-13324 does not lower intraocular pressure (IOP) as much as does latanoprost. The ROCK inhibitor was shown to lower IOP, but latanoprost was slightly more effective. Additionally, hyperemia (red eye) was more common with AR-13324. Though some might find this result disappointing, it is important to realize that latanoprost is a high bar for comparison. What will be interesting to see is whether or not the IOP-lowering effect of AR-13324 is additive to that of latanoprost.
Double-masked, Randomized, Dose–Response Study of AR-13324 versus Latanoprost in Patients with Elevated Intraocular Pressure

>> Got Questions? See Our FAQs or Ask Dr. David Richardson <<