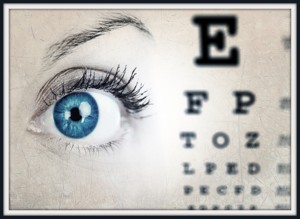 Visual acuity, using a Snellen chart is a simple and routine eye evaluation usually performed in ophthalmologists’ and optometrists’ offices. It is used to estimate a person’s degree of visual disability.

In order to perform this test a person is generally asked to sit or stand a standard distance of 20 feet (or 6 meters) from a standardized screen.  She is then asked to identify a set of letters in decreasing order of size. To put it simply, for a person to be considered to have functional 20/20 vision,  she must be able to see the smallest letter on the chart at a distance of 20 feet (numerator) as an average person with “normal” vision would see at 20 feet (denominator).

A person with intact healthy vision will usually range between 20/15 to 20/20 while the visually impaired can barely see a letter at a distance of 20 feet which a normal person could be expected to see 100 feet away(20/100). Hence, the higher the denominator, the worse the vision. The World Health Organization (WHO) visual acuity threshold for blindness is 20/400, while the US defines it as 20/200.1  To put this into perspective, if you were legally blind by Snellen acuity in order to identify something you would have to be within 20 feet of the same object that someone with normal vision could see if it were 200-400 feet away!

Although visual acuity screening can detect persons with obvious visual loss, it cannot detect those suffering from minute changes in vision as would be expected in the early stages of glaucoma. In glaucoma, changes in vision are often subtle and may not manifest as frank visual loss early in the disease.  Thus, early glaucoma will mostly likely be missed by a visual acuity test alone.  Peripheral vision is often more affected than central vision in early and moderate glaucoma. It is for this reason that glaucoma specialists prefer visual field tests such as the Goldmann or Humphrey Zeiss perimetry over the visual acutiy test.

Perimetry or visual field examination’s advantage over visual acuity is its ability to identify and delineate central and peripheral visual defects. Using a dome shaped machine upon which multiple points of light are flashed, the eye’s range of vision field can be specifically mapped out. Formal visual field testing can detect subtle changes in peripheral vision or localize a blind spot called a scotoma which is common in glaucoma.

In one study comparing patients who had visual acuity testing alone versus those who had additional perimetric tests, it was shown that visual impairments in glaucoma can be seriously missed if visual field testing is not included.  Aside from its diagnostic value in glaucoma, monitoring disease progression is one of the most important indications of visual field testing. The Advanced Glaucoma Intervention Study (AGIS) revealed that frequent visual field checking is more likely to detect progressive loss of vision from glaucoma.3

Studies such as the AGIS lead us to conclude that visual field testing is an important diagnostic test to screen and monitor for glaucomatous loss of vision. Glaucoma specialists recommend it for persons most likely to develop glaucoma such as the elderly, African Americans and those with significant family history.  Since glaucoma is often asymptomatic in its mild stages, detection of early visual field loss is critical to preventing eventual blindness.

The advantage of early diagnosis through a visual field test is that glaucoma treatment can be managed early in its course, even before patients develop symptoms or visual disabilities. Patients now have a wide variety of treatment options such as eye drops, laser treatments, and surgeries such as canaloplasty. If you are at risk for glaucoma, ask your eye specialist for a visual field test.  If you already have glaucoma, try this free online assessment to determine if you might be eligible for canaloplasty.

Anders Heijl*, Johan Aspberg and Boel Bengtsson. The effect of different criteria on the number of patients blind from open-angle glaucoma. BMC Ophthalmology 2011, 11:31